My face is inches away from Ugly Joe, a snarling boxer who looks as tough as nails. We are about to duke it out in the boxing ring .

He reaches out to punch me straight in the face and I jump back, but not before he squeezes in a hard jab at my abdomen.

I wince even though, physically, I feel no pain. After all, I am merely a player in a virtual-reality game of boxing.

Yet for about two minutes - which feel more like 10 - my mind has me believing that I am genuinely battling for my life, never mind that the only danger I seriously face is looking like an idiot as I wear an HTC Vive virtual-reality headset.

At virtual-reality arcades V-Room in JCube and Ignite VR Arcade in Marina Square, there is every imaginable game one could think of, from the classic shooter games to those that have you flipping burgers in a diner or trapped in a creepy situation you have to escape from. 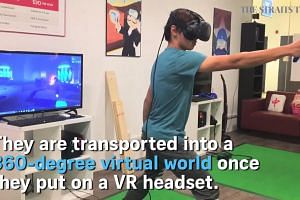 At the start of each game, I need a couple of seconds to acclimatise myself to my new surroundings, move around and figure out which buttons to press on the controllers. It is usually straightforward and not too complicated.

The animated graphics are similar to a video game's but in VR, I am not facing a screen controlling a character. I am that character.

In Star Wars: Trials On Tattooine (a Star Wars virtual-reality experience), I turn into a Jedi and wield a lightsaber to defend myself against attacking Stormtroopers coming from all angles.

The lightsaber is virtual, but it beats swinging the electronic toy version I've found at Toys "R" Us.

The highlight is meeting a "life-size" version of R2-D2. I squeal in delight and crouch to try to hug it, only to realise that it is not real.

Good thing there are not many moments like this that send me crashing back to reality; for most of my gametime, I am completely sucked into the virtual world.

In the game Richie's Plank Experience, I take a lift to the top of a building, 160m above ground, and am supposed to walk to the end of a narrow wooden plank that is balancing on the building's edge.

I am truly terrified and cannot do it.

Whenever I remove the headset after playing a game, I feel light-headed and need to sit down for a breather.

I am told that I have played for 20 minutes, but it feels like hours. Despite having felt the strain of wearing the 555g headset, I am disappointed to be back in the real world.

A version of this article appeared in the print edition of The Straits Times on March 24, 2017, with the headline ''I thought I was battling for my life''. Subscribe
Topics:
More
Whatsapp Linkedin FB Messenger Telegram Reddit WeChat Pinterest Print Purchase Article Copy permalink