BELGIUM (AFP) - Hundreds of people turned out on Saturday (Aug 27) to pay their respects at the funeral of Belgian jazz legend "Toots" Thielemans, who died last week after a glittering career spanning seven decades.

Jean-Baptiste Frederic Isidore Thielemans, known affectionately as "Toots" and widely acknowledged as the king of jazz harmonica, died in Brussels on Monday aged 94.

Belgian Prime Minister Charles Michel was among the mourners at the church in La Hulpe, near Brussels, where Thielemans lived. A giant screen was set up to relay the service to the crowds outside.

Over the years, Thielemans performed with some of the greatest names in jazz, including Ella Fitzgerald, Bill Evans, Ray Charles as well as legendary singer Frank Sinatra. He played the closing theme on the much-loved kids' TV show "Sesame Street". 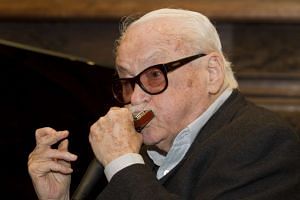 Musician and producer Quincy Jones, who famously took Michael Jackson's career to new heights with "Thriller", dedicated a concert this week to Thielemans.

"You'll leave an eternal hole in my soul," Jones wrote on Twitter.

Born in 1922 in the working class Marolles district of Brussels, Thielemans got his big break when he joined Benny Goodman on a European tour in 1950 before moving to the United States.

He took up the harmonica as a hobby and then during World War II, as described on his official website, he became hooked on jazz.

Buoyed by the commercial success of his now standard "Bluesette" in 1962, he played harmonica on the soundtrack for the hit Dustin Hoffman and Jon Voight film "Midnight Cowboy" in 1969 and many others.

In 2001, Belgian King Albert II made him a baron, sealing his status as one of the country's best-known figures on a par with Tour de France great Eddy Merckx.