The story: A new monster king demands the capture of baby monster Wuba, a prince from the former monster kingdom. As Wuba goes into hiding among the humans, he encounters gambler Tu Sigu (Tony Leung Chiu Wai) and monster hunter Yun (Yo Yang). The humans he is looking for, however, are those who cared for him when he was a newborn, Song Tianyin (Jing Boran) and Huo Xiaolan (Bai Baihe).

What is acclaimed dramatic actor Tony Leung, better known for starring in arthouse flicks such as In The Mood For Love (2000), doing in a frivolous family fantasy movie such as this?

Even though he starred in another comedy before this - the romcom See You Tomorrow (2016) - it is still a little alarming to see him go entirely slapstick here and hopping around with little critters.

Then again, this is not just any children's movie. This animation-cum-live-action hybrid is the follow-up to one of China's highest-grossing films of all time. The first Monster Hunt (2015) was a surprise mega hit, chomping up more than 2.44 billion yuan at the box office there.

In any case, it is a good thing that Leung is branching out to do more lighthearted films because he is a natural comic.

He is the best thing about the film, consistently delivering the biggest laughs and never appearing as if he is trying too hard at it either. 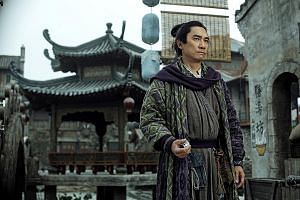 Some of the funniest scenes are those between him and singer-turned-actress Li Yuchun. She is also surprisingly hilarious in the role of a woman - with a Sichuan dialect accent - who is hopelessly in love with him.

The pair's easy performances are all the more pronounced when one compares them to, say, their co-star Jing, whose idea of performing comedy is to pout and sulk through all of his lines.

Getting an A-lister such as Leung must have cost the producers so much that they feel compelled to feature him in many scenes - so much so that he trumps the monsters.

Indeed, the film is no longer about the monsters, who had been the stars of the first movie, but about the humans who live among them.

Which is just as well because the monsters were never particularly likable or memorable in the first place. Save, of course, for little Wuba, the radish-like baby monster that kids seem to find so cute and cuddly. He is one of the few that make their return, and, in smaller doses, he is not as annoying.