Neil Harbisson, who has a camera- equipped antenna permanently embedded in his skull, says some women try to pull out his attachment

The world's first officially recognised human cyborg, Neil Harbisson, is visiting Singapore this weekend for the opening of ArtScience Museum's latest exhibition, Human+: The Future Of Our Species.

Harbisson, a 34-year-old artist, has a camera-equipped antenna permanently embedded in the back of his skull.

He is widely considered to be a pioneer in cyborg rights after the British authorities in 2004 sanctioned the inclusion of his antenna in his passport photograph.

Harbisson, who suffers from total colour blindness from birth, had the antenna installed in 2004 to overcome the condition. As a result, he hears rather than sees colours and can even sense invisible colours such as ultraviolet and infrared.

Colours are first perceived by the sensor hanging in front of his head, then translated into a series of vibrations in the microchip embedded in his skull, resulting in specific sounds that correspond to specific hues. The colour blue, for example, sounds like the C note, says Harbisson.

"It connects me with other species that can sense these colours, so I share this with other animals," says Harbisson.

He first developed the technology in 2003 with the help of a computer scientist, while studying experimental music composition. Men usually don't touch it, with the exception of security guards, who can be suspicious of it.

- HUMAN CYBORG NEIL HARBISSON (above) on people touching his antenna

For example, he can “dress in songs” or even “eat melodies”.

“I put different coloured food on a plate and, depending on the order of the food that I put on the plate, that can create a song and then I can eat music,” says Harbisson, adding that the F and A chords, which correspond to the colours red and green, usually taste good.

The Human+ exhibition, ArtScience Museum’s latest show which explores the issue of human modification and advancement, opens tomorrow and will feature a work from Harbisson, the Sonochromatic Head.

Visitors here can engage with him through the artwork. The sculpture, which is modelled in Harbisson’s likeness, contains a camera that can transmit colours to his antenna through an Internet connection.

“The head in the exhibition will be the connection in Asia, my sense of colour will be connected to the sculpture,” says Harbisson, who is single and based in New York.

Outside of the exhibition, only five friends can “access” his sense, as he allows them to send colours to him through their smartphones. The colours transmitted to him can even colour his dreams.

“If I’m asleep and they send yellow at night, my dream suddenly becomes yellow or suddenly in my dream, I’m in a field of yellow plants,” he says.

While colourful images have woken him from sleep before, he says even when he is awake, the extra sense has impacted his everyday life, to the point that he finds it difficult to remember what it is like without his extra sense.

There are many who oppose cyborgs like himself, he says.

"There have been so many films, comics and books that discuss the union of technology and humans as negative, that a lot of people are afraid of adding new senses or new organs," says Harbisson.

But he hopes that cyborgism will take off in the near future, explaining that instead of changing the planet to suit themselves, humans should change to suit the planet.

"This is not a medical project, It's not something to cure me. It's an art project that allows me to extend my perception of reality beyond human limitations," he says.

"Technology can allow us to go beyond what is traditionally human and I think that's something that we should all do."

Reactions to his antenna have ranged from derisive laughter to excitement.

Getting stopped by curious passers-by is a daily occurrence too, says Harbisson, adding that most are keen to learn more about his antenna, although they stop short of touching it. 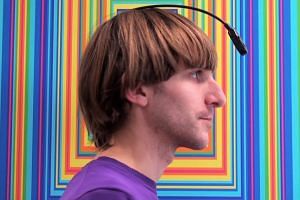 But he steers clear of drunk women, who he says often try to pull out his antenna.

"It's strange. It's happened in so many countries. Men usually don't touch it, with the exception of security guards, who can be suspicious of it."