NEW YORK (WP) - Hugh Hefner, who died on Wednesday, will be buried beside the woman who helped turn him into a publishing mogul: Marilyn Monroe.

When he launched Playboy in 1953, he decided to use a nude photo of Monroe as "Sweetheart of the Month" - the predecessor to Playmate.

"I feel a double connection to her because she was the launching key to the beginning of Playboy," Hefner told CBS Los Angeles in 2012.

"We were also born in the same year." 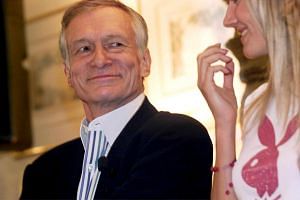 He told the Los Angeles Times: "Spending eternity next to Marilyn is too sweet to pass up."

In the early years of her career, Monroe posed nude for a photographer, who sold the pictures for US$900 to Western Lithograph.

Hefner paid US$500 for one of those nude images, plus another clothed photo, to launch his magazine.

"(His) greatest piece of luck was his choice of the first centrefold," the New York Times wrote. "It remains by far the sexiest of all Hefner's pin-ups." WASHINGTON POST