As new music groups keep forming, what does it take for Korean pop star wannabes to stand out in the saturated industry?

Just a few years ago, many could name popular Korean pop acts such as Girls' Generation, BigBang and Psy, even if they were just casual pop music fans.

Fast forward a few years and the extent of the average Joe's knowledge of K-pop acts is likely to be those same few names.

Has the Korean pop juggernaut ground to a halt? 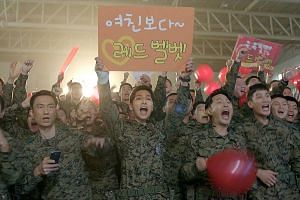 Without the advantage of novelty when K-pop first exploded globally, new groups are facing an uphill battle to gain traction.

Producer Ahn Joon Young, 38, tells The Straits Times: "The K-pop scene is cruel. I think it is like a battlefield without guns."

He is behind the Mnet reality show Produce 101, which featured 101 female trainees from 46 talent agencies vying for a spot in a girl group, I.O.I. The final 11-member band line-up was determined by audiences' votes.

South Korea's K-pop scene is cruel. I think it is like a battlefield without guns.

PRODUCER AHN JOON YOUNG, who is behind Mnet reality show Produce 101, which features 101 female trainees from 46 talent agencies vying to be in a girl group, I.O.I.

Mr Ahn says: "There are one to two new idol groups debuting every week, which amounts to more than 50 new groups coming out every year.

"Yet, at most only five teams are able to stay in the public's mind."

His show gave rookies a chance to leave an impression on the audiences. After the show is broadcast, trainees who were featured in it became top Internet searches on Korean portals.

Mr Ahn adds: "As the audience were the people who produce I.O.I., I think they will have a stronger attachment towards the group."

Even the group's name, I.O.I., was given by fans through a poll because they thought the letters look like the number 101 in the programme's title.

The girl group will release their debut single, Dream Girls, today and promote themselves as a group for a year.

Singaporean entrepreneur Alan Chan, who was behind Singapore's first K-pop venture Skarf, experienced the fierce competition of trying to snag an appearance for his girl group on music television programmes in South Korea.

"You have to pay an external public relations team to get your group into the queue for a chance to be on a music TV show during their album launch period," says Chan, 53, who is a partner of Korean-based JTCorea Entertainment. "But that doesn't guarantee you exposure as there are so many groups vying for the spot."

Undeterred by the cut-throat competition, he will be launching a new K-pop girl group OhBliss - with five Korean members - this month. He also has plans to start another girl group and boyband, and recruit another member for OhBliss, from Singapore, Hong Kong or China.

China, where the vast fan base and corporate market are hungry for K-pop, is his target.

The South Korean pop music complex's endless supply of teenyboppers packaged into idol groups is a double-edged sword: It leads to saturation, but it also ensures new blood is injected into the industry, say observers.

Mr Ngiam Kwang Hwa, 55, managing director of concert promoter One Production, says: "K-pop groups are heavily packaged and very good at it, so this formula is here to stay. Fans will eventually get tired of it, but not just yet. There are constantly new groups being introduced to the market.

"Once the songs, among different groups, start to sound similar and with similar dance steps, they will not make it."

One Production, which has brought in K-pop concerts by acts such as rock band CNBlue and boyband BigBang, will be staging boyband GOT7's show here next month. The seven-member group are among the next wave of popular Korean music acts hoping to repeat the success of BigBang and Super Junior.

Girl group Red Velvet, which is backed by mega talent agency SM Entertainment, also received much exposure with their recent cameo in the finale of the hit Korean drama Descendants Of The Sun.

Another upcoming boyband, iKON, were formed through survival reality show Mix & Match in 2014. They will be holding their first concert here in July.

Secondary school student Avier Tan, 13, who owns iKON's CD and has their poster plastered on his bedroom wall, says: "I've watched iKON on the Mix & Match series and can't wait to watch their performance in Singapore."

Korean-American rockers Royal Pirates are another heir apparent to the pop throne, although their strategy is different from those of the idol groups - they offer an alternative to the usual sugary K-pop.

Their drummer EXSY, 27, whose real name is Kim Soo Yoon, says: "Audiences are still interested in K-pop. They are waiting for new stuff to come out because even though K-pop is good, it's similar to whatever is out there. We are trying to introduce rock K-pop."

She says: "Most of the songs that the major entertainment companies produce for their artists have very similar styles - mainly a lot of dance and hip-hop music. So I want to listen to something different."

South Korea's recording industry is still on the rise, according to data from the International Federation of the Phonographic Industry, which represents the recording industry worldwide. South Korea made it to No. 10 as one of the Top 10 Global Music Markets in 2013 and climbed to No. 8 last year.

Nanyang Technological University's assistant professor Liew Kai Khiun, 43, who has research interests in Asian pop culture, says K-pop's current stronghold is possibly due to the absence of any regional competition over the past decade, as the popularity of J-pop, Mandopop and Cantopop waned.

He adds: "K-pop may seem manufactured, but with a continual flow of highly trained fresh faces marketed by well-oiled entertainment industries, K-pop is realistically hard to beat in Asia."