LOS ANGELES (Reuters) - A Netflix executive promised on Sunday (July 29) a "fitting end" to the streaming service's acclaimed political drama House Of Cards but did not divulge how the series wrote out scandal-tainted star Kevin Spacey.

The show put Netflix on the map as a home for original entertainment when the series debuted in 2013 starring Spacey as conniving politician Frank Underwood.

"We're really proud of the show, and it's a fitting end,"Ms Cindy Holland, vice-president of original series at Netflix, said in response to questions at a Television Critics Association event where networks promoted upcoming shows.

"We always planned for season six to be the final season, and we are proud of the work of Robin" and the rest of the cast and crew, she added.

The company has not yet set a release date.

House Of Cards upended television when Netflix released the first season's episodes all at once to encourage online"binge viewing". 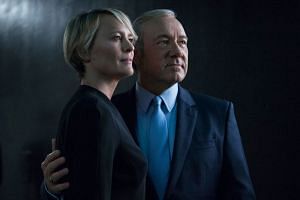 Wright on Spacey: I didn't know the man

In November last year, Netflix quickly cut ties with Spacey after allegations of sexual misconduct surfaced. He has been accused by more than 20 men and has said nothing publicly about the allegations since an apology to the first accuser in October last year.