LOS ANGELES (AFP) - Hollywood actresses who accuse Harvey Weinstein of sex crimes on Tuesday (Feb 25) welcomed his next trial in Los Angeles, but voiced fear that he could avoid jail by claiming medical ailments.

The 67-year-old disgraced movie mogul was convicted Monday in New York of rape and sexual assault, in a verdict hailed as a historic victory by the #MeToo movement against sexual misconduct.

Eyes now turn to California, where separate charges against Weinstein have been brought by prosecutors.

"Harvey, you messed with the wrong women. We will see you here in Los Angeles, where hopefully your conviction will leave you in jail for life," actress Louisette Geiss told a news conference outside Los Angeles City Hall.

Weinstein was due to be imprisoned in New York's notorious Rikers Island jail but spent Monday night in a Manhattan hospital after complaining of chest pains.

"His lawyers have said that he's going to be out while they appeal this case because of his health problems... that's terrifying," said TV reporter Lauren Sivan, among 11 women who spoke at the news conference.

If Weinstein does not go straight to jail "he's getting special treatment," she added.

Several of the women expressed doubts over the severity of Weinstein's medical condition.

"Maybe he's experiencing a panic attack - you know, something all of us have experienced," said Sarah Anne Massie.

The Los Angeles charges include allegations from ex-model Lauren Young that Weinstein sexually assaulted her in a Beverly Hills hotel in 2013 when she was a 22-year-old aspiring actress. 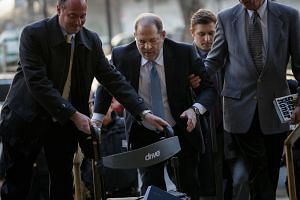 But the comments, coming from a man who has himself been accused by numerous women of sexual misconduct, were not welcomed by Weinstein's Los Angeles accusers.

"In a time when no less that the president of the United States is a sexual predator, and countless other predators continue to persist, yesterday's verdict was a loud and unwavering statement," said Melissa Sagemiller.

Weinstein is set to be sentenced in New York on March 11, facing up to 29 years in prison for his convictions at that court.

He is likely to be given credit for being a first offender, however, something he will not be able to offer in his mitigation after any future conviction.

The Los Angeles district attorney's office has said it is not clear when its separate case would be heard.