While most artists may have some jitters playing their first festival headline show, singer-songwriter Dru Chen, 26, is staying cool.

"I don't feel any pressure," he says in a recent interview. "I play the same way in front of five people as I do in front of 1,000. That's very important to me."

No stranger in the Singapore soul and funk scene and having performed abroad, doing gigs in Australia, the United States, Malaysia and the Philippines, he will be playing at Getai Soul, a music festival happening at Pearl's Hill City Park this weekend. 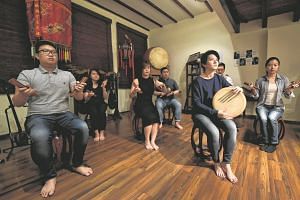 His set will include songs from his EP, Intentions (2013), several follow-up singles and new material that he wrote recently.

Inspired by artists such as Stevie Wonder, James Brown, The Beatles, Jimi Hendrix and Prince, he released his debut single, You Bring Out The Best In Me in 2013.

He has been singled out by home-grown entertainment veteran Dick Lee as one of the most exciting young talents in the music scene here today.

I play the same way in front of five people as I do in front of 1,000. That's very important to me.

SINGER-SONGWRITER DRU CHEN, who says music comes naturally to him

Chen plays the guitar in Lee's band during live shows, including in last year's Sing50 concert at the National Stadium in front of a 41,000-strong audience.

He says: "I really enjoy the experience of working with veterans. I'm a music sponge, I go in with open ears and an open mind."

His love of music dates back to his childhood - he started piano lessons at five years old and moved on to the violin and the guitar.

His parents had a collection of Motown and 1960s music, which kicked off his lifelong passion for classic soul, R&B, rock and blues.

"Leaning towards music came easy, it's always a natural fit for me - like breathing." 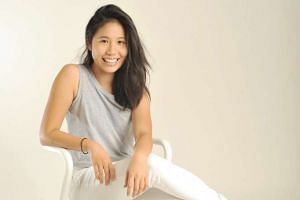 Inspired by a piece of floating ash 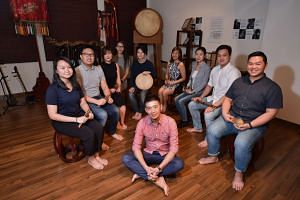 The Australia-born musician studied at the Overseas Family School here, then went to Australia to study at the Queensland Conservatorium of Music, graduating with a degree in music technology.

He stayed in Melbourne for a few years to work as a musician, but came back to Singapore last year and has been based here since.

Even though he got to play major shows such as music festival Soulfest in front of a crowd of 10,000, the bachelor says "the opportunities were scarce" in Australia and that his work as a musician "was underutilised".

He adds: "In Melbourne, I wasn't getting as much exposure as I was getting here. Coming back to Singapore is a whole different ball game."

Chen says: "Teaching takes up a lot of my time and keeps me busy. It takes me back to the time when I was learning music."

He is also spending a lot of time in the studio working on new songs for a full-length debut album.

He wants to pursue studying music as a form of therapy in the future.

"Music is something that is off this world and slightly beyond it. There is definitely a spiritual element in it, it's a force to be reckoned with."

A version of this article appeared in the print edition of The Straits Times on May 06, 2016, with the headline 'Headline act feels no pressure'. Subscribe
Topics:
More
Whatsapp Linkedin FB Messenger Telegram Reddit WeChat Pinterest Print Purchase Article Copy permalink