NEW YORK (REUTERS) - Former movie producer Harvey Weinstein was receiving medical attention for chest pain at Bellevue Hospital in Manhattan on Tuesday (Feb 25), his spokesman said, a day after a New York jury convicted him of sexual assault and rape in a stunning victory for the #MeToo movement.

Once one of Hollywood's most influential producers, Weinstein, 67, was found guilty on Monday of sexually assaulting former production assistant Mimi Haleyi in 2006 and raping Jessica Mann, a onetime aspiring actress, in 2013.

More than 80 women have accused Weinstein of sexual assault, and Weinstein has denied all of the accusations and said any sexual encounters were consensual. The allegations helped fuel the #MeToo movement on social media in 2017, which inspired more women to publicly accuse powerful men of misconduct.

Juda Engelmayer, a spokesman for Weinstein, said on Monday that the onetime movie mogul was taken to Bellevue Hospital, which has a unit that provides medical care for jail inmates, after he was led away from court in handcuffs.

If not for his medical concerns, the former producer would have gone to New York City's Rikers Island jail complex.

Weinstein remained in the hospital on Tuesday as a "precautionary measure" because he had complained of chest pain, and he was expecting a visit from his legal team later in the day, Engelmayer said on Tuesday.

After the verdict on Monday Arthur Aidala, one of Weinstein's lawyers, quoted his client as saying, "I'm innocent. I'm innocent. How can this happen in America?"

His sentencing hearing was set for March 11.

The attorney vowed to appeal.

Weinstein, who produced acclaimed films like The English Patient and Shakespeare In Love, faces up to 25 years in prison on the sexual assault conviction. He was also convicted of third degree rape - sexual intercourse without consent - which carries a prison sentence of up to four years.

The jury of seven men and five women acquitted Weinstein on the most serious charges, which carried a potential life sentence. 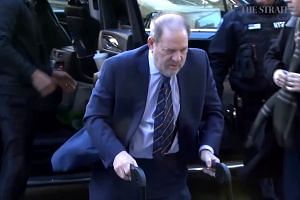 A statement from the leaders of the #MeToo movement said: "The jury worked with an incredibly narrow and unjust set of laws governing sexual assault, and though he was not convicted on all counts, Harvey Weinstein will have to answer for his crimes."

A long legal battle in the appeals courts is likely to ensue. At the start of the trial, defence lawyers accused the judge of bias, the prosecutors of withholding evidence, and the media of turning the trial into a circus.

Weinstein still faces sexual assault charges in California, which were announced just hours after his New York trial began on Jan 6. Dozens of women have also filed civil lawsuits against him.

"Just seeing someone so powerful taken down and being held accountable for his action - is a huge moment," Dawn Dunning, an actress-turned-costume designer who testified against Weinstein, told CNN on Tuesday.

"I don't look at this as the end of a trial, it's the beginning of something bigger."