NEW YORK (AFP) - Harvey Weinstein on Monday (July 9) pleaded not guilty to sex crimes against a third woman, as prosecutors plough on with a case that the #MeToo movement hopes will end with the disgraced Hollywood mogul sent to prison.

Pale and pasty faced, the 66-year-old former Tinseltown titan was escorted by elbow into a New York courtroom in handcuffs, dressed in a dark suit, tie and white shirt. He appeared to have lost weight.

"Not guilty," Weinstein replied when asked how he pleaded to the new charges: a criminal sexual act for allegedly forcing a woman into oral sex on July 10, 2006 and two counts of predatory sexual assault.

The former producer of box office hits such as Shakespeare in Love and The Iron Lady faces a maximum sentence of life in prison if convicted of predatory sexual assault charges at trial. His latest Manhattan arraignment came after he pleaded not guilty on June 5 to allegedly raping one woman at a Manhattan hotel in 2013 and forcing another to perform oral sex on him in 2004.

Other than three replies of "yes, sir" when questioned by the judge about names listed on a protection order, the father of five did not speak during the 15-minute hearing in the packed Manhattan courtroom.

Prosecutors argued that Weinstein should be placed under house arrest and moved to Manhattan. But the defence argued against changing his bail conditions and later announced the court had agreed.

Under a $1 million (S$1.35 million) bail agreed May 25, Weinstein is allowed to travel within the states of New York and Connecticut, where he is living. He surrendered his passport and wears an electronic monitoring device. The next hearing has been scheduled for September 20.

His career imploded in October in a blaze of accusations of sexual misconduct and abuse from dozens of women that triggered a major reckoning about harassment in the workplace and the #MeToo movement. Manhattan District Attorney Cyrus Vance says Weinstein is indicted "on some of the most serious sexual offences" under New York penal law and has urged other potential victims to come forward.

Gloria Allred, who is representing the third woman, told reporters that her client would testify under oath at trial and taunted Weinstein's lawyer Ben Brafman. "Are you really willing to roll the dice and hope and pray that your client will be able to answer questions under oath not only about this alleged third victim, but about other alleged victims as well?"

Allred has also represented multiple accusers against Bill Cosby, the former television icon in April convicted of sexual assault in Pennsylvania, the first celebrity courtroom battle of the #MeToo era. 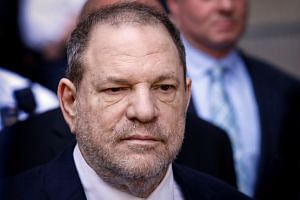 Weinstein has denied all accusations of non consensual sex. Brafman told reporters he had "corroborative evidence" in the form of witnesses and email traffic to support Weinstein's case. "Mr Weinstein is not a predator. He is not a rapist and I believe that when this case is over, we will ultimately see him to be exonerated," Brafman said after the hearing.

"Proof beyond a reasonable doubt should be the only way someone gets convicted," he added. "If we allow Pulitzer-driven reporters to decide this case then it could be hopeless."

Reporting by The New York Times and New Yorker that brought down Weinstein and spawned the sexual harassment watershed won the Pulitzer Prize for public service, the most prestigious award in US journalism.

Brafman said Weinstein was "still trying to make a living" and seeing doctors, but declined to detail his medical issues, saying only that he was "doing as well as someone can be expected."

None of the three women have been named, but Brafman says the 2013 rape complaint comes from a woman who had a long affair with Weinstein. Former actress Lucia Evans told The New Yorker that Weinstein forced her to perform oral sex and is thought to be one of the women. Overall, nearly 100 women have come forward publicly to say they were harassed or sexually abused by Weinstein over a period of more than two decades.

The #MeToo movement has seen people around the world come forward with cases of sexual mistreatment, leading to the downfall of powerful men across multiple industries.