LOS ANGELES (BLOOMBERG) - With opening arguments in Harvey Weinstein's rape trial set for Wednesday (Jan 22), the defence won the right to tell the jury about emails from some of the witnesses that Weinstein says show their sexual encounters were consensual.

New York State Supreme Court Justice James Burke on Tuesday said he was "prohibiting the use of the actual emails in the opening statements" but wouldn't stop the defence from "stating what the complainants said" in the emails, at least "in general terms," to counter their claims of coercion.

Calling the evidence "devastating," defence attorney Damon Cheronis said he had "dozens" of emails in which the women "bragged" about having sex with Weinstein, who is charged with rape and predatory sexual assault.

In addition, Cheronis said, one prosecution witness sent a "loving" email to Weinstein after the encounters, while a second sent him an email asking to introduce him to her mother.

Weinstein, 67, is alleged to have raped a woman in a Manhattan hotel room in 2013 and performed a forcible sex act on another in 2006 in his apartment in the city.

Prosecutors plan to call four other women as witnesses to show a pattern of "prior bad acts."

"We will counter with their own words," Cheronis said.

In the emails, he said, the women "describe being in loving relationships, in which they describe him as someone they cared about both before and after these alleged sexual assaults."

He said the state "cannot weave a story of power and anger and sexual assault and then think we cannot counter that."

The fallen Hollywood power broker on Tuesday was denied a request he has repeatedly made to delay his trial and move it out of Manhattan, arguing that "deep and bitter prejudice" shown by potential jurors made it impossible for him to get a fair trial in the borough. 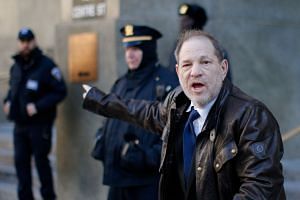 More than 80 women have accused Weinstein of sexual harassment, abuse or assault, galvanising the #MeToo movement.

In the request, Weinstein's lawyer Arthur Aidala cited the protest of a chanting flash mob outside State Supreme Court in lower Manhattan on Jan 10 while jury selection was under way, saying its cries could be heard in the 15th-floor courtroom.

He cited the dozens of press reports about the jury selection process itself, noting that an editor for Yahoo Lifestyle had been called as a potential juror and then written a first-person article about it.

The defence was further hampered, Aidala said, after the Los Angeles District Attorney's office announced its own rape indictment against Weinstein on Jan 6, the first day of his trial.

Aidala noted that during the selection process, scores of potential jurors said they had heard about the new case.