NEW YORK (BLOOMBERG) - Harvey Weinstein, far from the predator described by prosecutors in his rape trial on Wednesday (Jan 22), was just a man who had consensual sex, the defence said in its opening statement.

"What you're going to see, the evidence from these witnesses, is that that's not true, he wasn't this master manipulator," attorney Damon Cheronis told a jury of seven men and five women in a hushed lower Manhattan courtroom.

Cheronis said the defence would show through the women's own testimony that the case is a "mirage" and that their accounts are undercut by messages at least two of them sent to Weinstein that included expressions of "affection" for him.

"At some point you're going to say, 'Oh my God, Harvey Weinstein is innocent!" he told the jurors, calling the prosecution's opening argument "a preview to a movie you won't see."

Earlier, in her own opening argument, Assistant district attorney Meghan Hast tore into Weinstein - now reduced from industry colossus to "the defendant" - telling jurors that he sexually assaulted two women and used his power to cover it up.

"During this trial, you are going to learn that the defendant was a savvy New York businessman, that he was a famous and powerful Hollywood producer, living a life of luxury that most of us will never know," Hast said as she used an oversize TV screen to display a photo of Weinstein in a tuxedo at a glamorous event.

As more than 100 spectators and journalists looked on, she turned and pointed at Weinstein, who was seated silently at the defence table about 6m away.

"But the evidence from the witness stand and from exhibits admitted during the trial will also show you that that man was a serial sexual predator and rapist," Hast said.

More than two years after the publication of explosive allegations that launched the #MeToo movement, Weinstein's New York criminal trial could send him to prison for the rest of his life.

Whatever the outcome, it marks an extraordinary moment in society's reckoning with decades of abuse and assault of women in entertainment and across industries - though New York State Supreme Court Justice James Burke has cautioned the jury that the trial "is not a referendum" on #MeToo.

Weinstein, 67, was once among the most powerful producers in the film industry, influencing American politics and culture.

Now he will spend weeks listening as state prosecutors argue he wielded his clout to assault women and get away with it. 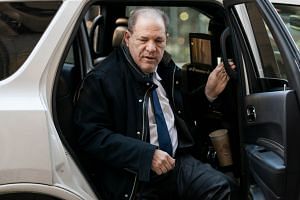 He arrived at court on Wednesday assisted by a member of his defence team but for the first time without the walker he has used since jury selection began two weeks ago.

The Oscar winner is on trial for attacking two women, but prosecutors, seeking to demonstrate a pattern of "prior bad acts," say they will offer testimony from other women as well. He faces five criminal counts, including rape and predatory sexual assault.

"At the end of this trial," Hast told the jury, "the evidence will be clear that this man, seated at this table, was not only a titan in Hollywood but a rapist who assaulted women who refused to comply with his orders and used his power and prestige in the entertainment industry to ensure their silence."

The jurors - six white men, an African-American man, three African-American women and two white women - will decide whether Weinstein is guilty of raping a woman in a Manhattan hotel room in 2013 and performing a forcible sex act on another in 2006 in his apartment in the city.

Once openings are done, testimony will begin later on Wednesday.

More than 80 women have accused Weinstein of harassing, abusing or assaulting them, including the actors Rose McGowan and Annabella Sciorra. Sciorra's lawyer, Gloria Allred, has said her client is going to testify at the trial to support the prosecution's case.

On Wednesday, Allred was seated in the front row, behind the prosecution table, along with Douglas Wigdor, a lawyer for two women who have accused Weinstein of sexually assaulting them. Manhattan District Attorney Cyrus Vance Jr was in the row behind them. Weinstein sat at the defence table with half a dozen lawyers.

At least 200 people lined up in the early-morning January chill to get a place in the courtroom, which seats just over 100. Among them were a number of young women who work in the district attorney's office and a law student there to observe the proceedings.

Journalists from around the world were in attendance, from major media to less prominent outlets. Among those queued up on the press line was Cheslie Kryst for Extra, a lawyer herself, as well as Miss USA 2019.