LOS ANGELES (WASHINGTON POST) - Guess chairman Paul Marciano is relinquishing his day-to-day duties at the company in the wake of sexual-harassment accusations by model Kate Upton and other women.

The board and Marciano agreed that he should step away from the business - without drawing a salary - until the completion of an investigation, the apparel seller said on Tuesday (Feb 20). A special board committee with two independent directors is overseeing the matter.

Marciano stepped down as chief executive officer of Guess in 2015 but held sway over the company through his roles as co-founder, chairman and chief creative officer. He has denied the allegations, Guess said on Tuesday.

"I have pledged my full cooperation to the company, and I have the utmost confidence in our CEO, Victor Herrero, to continue leading the company during this time," Marciano said in a statement.

Guess shares are down 12 per cent this year.

Upton stepped forward in late January with allegations of sexual misconduct, invoking the #MeToo movement in social-media posts. She later said in an interview with Time that Marciano had touched her inappropriately after she began shooting a Guess ad campaign.

The Los Angeles-based company also said it has investigated two other allegations against Marciano that were surfaced by an entertainment website in November. One - taken from a lawsuit filed in 2009 - was denied by the executive at the time, Guess said earlier this month. 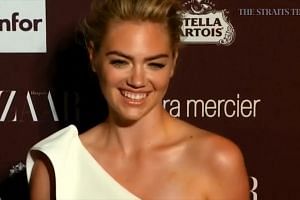 The law firm of O'Melveny & Myers is conducting the probe. The special board committee also retained Glaser Weil.

Marciano founded Guess with his three brothers in 1981. The brand's popularity caught on quickly, with its jeans becoming coveted for their signature washed style. In 1996, the company went public to raise money to repay debt.

"I always start the model's career," Marciano said to Teen Vogue in 2010. "I never pick a model who is already well known."

After stepping down as CEO, Marciano took the roles of chairman and chief creative officer, retaining much of his influence in the company. He was art director for numerous advertising campaigns during that time, the most recent starring Jennifer Lopez.

Asked about the models in his ads by Women's Wear Daily in 2012, Marciano said that he looks for female models who are "young, sexy, and adventurous," but not too thin.

Men, on the other hand, must "project a strong personality," he said.