LOS ANGELES (AFP) - Green Book took home best film at the Producers Guild Awards on Saturday (Jan 19), boosting its chances at next month's Oscars after it picked up three wins at the Golden Globes.

Green Book recounts the unlikely friendship between Don Shirley, a black piano virtuoso, and his driver, Tony Lip, during a concert tour through the segregated Deep South in 1962.

The win came despite recent controversies around the film, including the re-emergence of an anti-Muslim tweet from 2015 by screenwriter Nick Vallelonga (the late Tony Lip's son), for which he apologised profusely last week.

Farrelly himself was in hot water earlier this month because of stories in several media outlets from 1998 recounting his habit of flashing his genitals as a prank.

Among other notable categories, the best animated film went to Spider-Man: Into The Spider-Verse, The Americans won top TV drama and The Marvelous Mrs Maisel won the comedy series award. 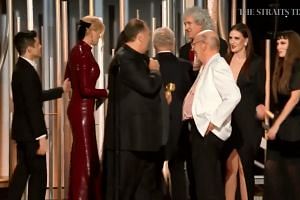 The PGA is a more low-key affair than the Golden Globes, but it is seen as a more accurate bellwether for the Oscars, with their top awards aligning in 20 of its 29 years.

That includes The Shape Of Water last year, though in 2017 the PGA's best film went to La La Land while Moonlight won the Oscars.

The Academy Awards nominations will be announced on Jan 22, with the ceremony itself on Feb 24.