"Power laces! All right!" says Marty McFly in Back To The Future Part II, as he puts on a pair of Nike sneakers in 2015 which magically secure themselves to his feet.

Since that iconic scene, fans of the 1989 movie have long dreamed of owning a pair themselves.

Now, it looks like this has become a reality.

Actor Michael J. Fox, who played McFly, received a pair of sneakers from Nike on Wednesday - Oct 21, 2015 - the day his character travelled to the future in the film.

The Michael J. Fox Foundation tweeted a video of Fox, now 54, trying on his brand-new sneakers.

"As the first, most celebrated wearer of the Nike Air Mag, we wanted you to be the first to receive a living pair," it said.

The letter I received from Tinker today. Thanks @Nike pic.twitter.com/UIolXrkUVC

According to a report in Quartz, Nike confirmed that it did make a working pair.

What’s more, Nike said it will release these self-lacing babies in 2016, but the limited-edition sneakers will be available only on eBay.

Proceeds will go to the Michael J. Fox Foundation, which conducts research on Parkinson’s Disease. Fox was diagnosed with the disease in 1991.

What others are doing to mark 'Back to the Future' Day

Fans of the series are marking the landmark date by celebrating some of the predictions that came true in the futuristic saga - and some that didn’t. Here’s a cool graphic that The Straits Times did last week. Click on it to view a high-res version. The town of Reston, Virginia, will change its name for a festival being held there to mark the film. A billboard that reads “Welcome to Hill Valley” - the fictitious town where the film takes place - will greet collectors of DeLorean cars expected there for a parade on Sunday (Oct 25).

In California, where the movies were filmed, some 200 fans, many dressed up as characters from the films, gathered at a Burger King fast-food restaurant where McFly grabs onto a pick-up truck to speed his skateboard ride to school.

Delighted fans in Santiago, Chile, watched as one of the DeLoreans used in the films was turned on and spread its wings at the city’s Museum of Fashion, which also displayed a leather jacket and white sneakers that Fox’s character wore in the movie. 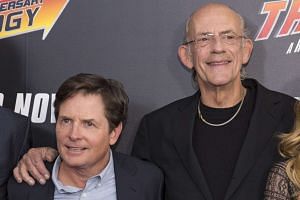 Hold on to your hoverboard: The Future is here

In Canada, the government also decided to get in on the fun, issuing an official recall notice on the DMC-12 DeLorean which it said had a problem with its “flux capacitor” that could impact its time travel abilities.

Even the White House jumped into the anniversary, organising online debates with specialists on the question, “What does 2045 look like?”

Other brands are cashing in on the action, too. Pepsi will sell limited-edition "Pepsi Perfect" - Marty’s soda of choice in the blockbuster movie.

In a commercial for Toyota, actors Fox and Christopher Lloyd - McFly and Dr Emmett Doc Brown - reunite on screen to discuss which predictions Back To The Future Part II got right.

There's even a Back to the Future 30th anniversary video game.