LOS ANGELES (NYTimes) - There is a long version of Ellen DeGeneres' life story - the comedienne was born on a rainy January morning in Louisiana and she was brought home in a Buick car (maybe).

And then there is a short version, a succinct tale of the barriers that, not so long ago, still stood in the way of gay entertainers.

DeGeneres, 61, told both versions in her acceptance of the Carol Burnett Award, the Golden Globes' fairly new lifetime achievement accolade for television, at an awards ceremony on Sunday night (Jan 5).

She is the second person to receive the honour, named for the "queen of comedy" after Burnett, 86, accepted the inaugural prize last year.

Burnett returned to the ceremony again on Sunday, seated next to DeGeneres, who cited the veteran among several of her television idols.

"I always felt like she was speaking to me," DeGeneres said in her speech. "At the end of the show, every time she pulled her ear, I knew she was saying: 'It's okay. I'm gay too.'"

DeGeneres' groundbreaking first sitcom, Ellen, was in its fourth season when she came out publicly in 1997.

Her sexuality would long define her career in the public eye and it would serve to inspire other comedians in the LGBTQ (lesbian, gay, bisexual, transgender, queer) community - namely Saturday Night Live cast member Kate McKinnon, who presented the award.

McKinnon said in her introduction: "In 1997, when Ellen's sitcom was at the height of its popularity, I was in my mother's basement lifting weights in front of the mirror and thinking: 'Am I gay?' And I was, and I still am." 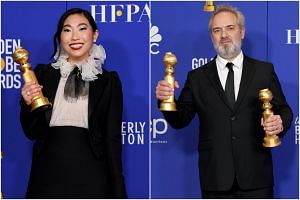 Golden Globes 2020: Wins by Awkwafina and 1917 prove the awards can still surprise

In Pictures: Stars hit the red carpet at the 2020 Golden Globe awards

"The only thing that made it less scary," she added, "was seeing Ellen on TV."

DeGeneres has three Golden Globe nominations under her belt, all for Ellen, but has never won. Her accolades have primarily come from elsewhere, including a myriad of Emmy Awards, more People's Choice Awards than anyone else and a Presidential Medal of Freedom, awarded in 2016.

The comedienne then moved into daytime television, where she has been dancing and advocating for kindness as host of The Ellen DeGeneres Show since 2003.

"All I ever want to do is make people feel good and laugh," DeGeneres said.

"And there is no greater feeling than when someone tells me that I've made their day better with my show.

"They make people laugh or be kind or help someone who is less fortunate than themselves. And that is the power of television and I'm so, so grateful to be a part of it."