LOS ANGELES (BLOOMBERG) - 1917, a World War I epic and surprise Golden Globe winner, has surpassed the latest Star Wars installment to become the most in-demand movie on ticket website Fandango.

The film from director Sam Mendes and Comcast's Universal Pictures won the prize for best drama at Sunday's Golden Globes, besting star-packed competitors such as Marriage Story and The Irishman.

The next morning, ticket sales for 1917 quintupled from a week earlier, according to data from the website.

The buzz has lasted, and the film now looks poised to handily beat out The Rise Of Skywalker in its opening weekend, ending a three-week winning streak for Walt Disney's Star Wars movie.

"For fans of fresh, original content in cinemas, the solid advance ticket sales for 1917 is great news," said Erik Davis, managing editor of Fandango, which is also owned by Comcast.

"It proves there's room at the table for new stories."

Even before the Golden Globes win, 1917 was expected to lead the box office this weekend, but the award gave the movie a bit more oomph.

The film may generate US$36 million (S$48 million) domestically, compared with US$16.8 million for Star Wars and US$14.4 million for Jumanji: The Next Level, according to Box Office Pro.

Before winning the best drama prize, 1917 wasn't expected to take in more than US$29 million.

That debut would be comparable to the performance of Lone Survivor and Zero Dark Thirty, according to Box Office Pro.

And 1917 is doing it without a celebrity cast or link to current events: Lone Survivor starred Mark Wahlberg, while Zero Dark Thirty chronicled the hunt for Osama bin Laden.

That may be a positive sign for the slate of original films set to hit theatres this year, Davis said.

Box-office receipts are expected to be down from 2019, the result of having fewer major blockbusters such as last year's Avengers: Endgame and Frozen 2. 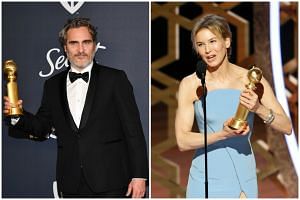 Golden Globes 2020: Wins by Awkwafina and 1917 prove the awards can still surprise

But original movies may pick up some of the slack.

1917 tells the story of two British soldiers during World War I who are tasked with delivering a message to enemy territory to save the lives of 1,600 troops.

"I definitely think that some of the big success stories of 2020 will be original storytelling," Davis said.