The story: The sequel picks up a few years after the events in Gareth Edwards' Godzilla (2014). Haunted by the death of their son, animal behaviour expert Mark (Kyle Chandler) has separated from paleobiologist Emma (Vera Farmiga), who is raising their daughter Maddie (Millie Bobby Brown). Emma is still working for Monarch, an agency tasked with studying Godzilla and other monsters, and she finds a way to control them using sound waves. But when the three-headed Ghidorah and a slew of other Titans are awakened, humanity's existence is imperilled.

In addition to Godzilla, this sequel packs in a whole menagerie of kaiju giant monsters. Those who have seen the Japanese movies would be familiar with the likes of moth-like Mothra, fire demon Rodan and the three-headed dragon Ghidorah.

The most shocking thing about Godzilla II is how boring it is.

Blame it on the screenplay by director and co-writer Michael Dougherty, whose writing credits include the X-Men flick X2 (2003) and Superman Returns (2006).

There are no surprises in how it all plays out and one is barely invested in the story. When a character volunteers to go on a suicide mission, what should have been a moving moment feels flat.

Rising teen star Brown (Stranger Things, 2016 to present) does her best to emote, but can do only so much with none-too-subtle lines like, "You're a monster", an accusation thrown at her mother. 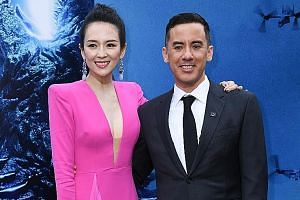 Elsewhere, there are unintended moments of silliness. The device Emma comes up with to emit the frequencies looks like a DJ console, while Chinese actress Zhang Ziyi shows up in a why-bother role as a scientist whose specialities seem to be Internet research and looking chic.

The prize for most monstrous waste of talent goes to Oscar winner Sally Hawkins (The Shape Of Water, 2017), who plays yet another scientist.

One hopes she got a decent pay cheque at least, considering the US$200 million (S$276 million) budget for this bloated and forgettable movie.

A version of this article appeared in the print edition of The Straits Times on May 30, 2019, with the headline 'Godzilla and friends hugely forgettable'. Subscribe
Topics:
More
Whatsapp Linkedin FB Messenger Telegram Reddit WeChat Pinterest Print Purchase Article Copy permalink