Feted Hong Kong composer Joseph Koo is the man behind a plethora of hits, including Frances Yip's The Bund and Teresa Cheung's Man In The Net. He will lead the concert, which features a line-up including Yip and Cheung.

All proceeds will benefit the less privileged at Ren Ci Hospital. Donation tickets are also available through the hospital (call Karen at 6355-6428). WHERE: The Star Theatre, 04-01 The Star Performing Arts Centre, 1 Vista Exchange Green MRT: Buona Vista WHEN:Tomorrow, 8pm ADMISSION: $88 to $1,000 from Sistic (call 6348-5555 or go to www.sistic.com.sg) HATS OFF TO LED ZEPPELIN

Hats Off To Led Zeppelin (above) is a tribute band honouring legendary English rock band Led Zeppelin, whose classic songs include Stairway To Heaven and Whole Lotta Love.

The group's name comes from Hats Off To (Roy) Harper, the last track on the album Led Zeppelin III (1970). WHERE: Kallang Theatre, 1 Stadium Walk MRT: Stadium WHEN: Tonight, 8pm ADMISSION: $28 to $68 from Sistic The eighth album by Japanese rock band Radwimps (above), Your Name (2016), was the soundtrack for the blockbuster anime of the same name. It hit No. 1 on the authoritative Oricon charts and includes songs such as Zenzenzense (Previous Previous Previous Life) and Nandemonaiya (It's Nothing). This quarterly concert series, which debuted in March, showcases music talent from Singapore and South-east Asia. It features up-and-coming music acts, with a focus on home-grown bands and musicians spanning different musical genres from indie to R&B. 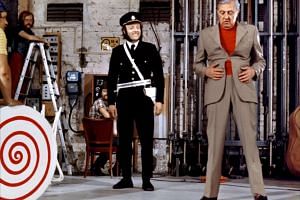 Arts Picks: A Wonderland Of Toys, readings at TheatreWorks, poetry on buses and more