LOS ANGELES (REUTERS) - Jennifer Lawrence on Wednesday (Feb 21) blasted a controversy over a photo of her wearing a plunging black dress outside on a cold London day as sexist, ridiculous and "not feminism."

The Oscar-winning star, 27, said in a Facebook posting that she was also "extremely offended" by what she called the"utterly ridiculous" reaction on social and mainstream media to the photo, taken as part of promotions for her upcoming movie Red Sparrow.

Many commentators saw the photo as a reflection of the pressure on women in Hollywood to look good, particularly given Lawrence's previous outspoken criticism of the gender pay gap in the movie industry.

"True equality means either Jennifer Lawrence getting a coat, or Jeremy Irons having to pose for a photo call in a**less chaps," tweeted London journalist Helen Lewis.

Australian journalist Stephanie Peatling remarked on Twitter that it was "cold enough that the bloke actors have to wear coats and scarves to their press call and yet poor Jennifer Lawrence is wearing a small amount of fabric some might call a dress."

Lawrence, one of the most sought-after actresses in Hollywood, was having none of it.

"That Versace dress was fabulous, you think I'm going to cover that gorgeous dress up with a coat and a scarf? I was outside for 5 minutes. I would have stood in the snow for that dress because I love fashion and that was my choice," she wrote on Facebook. 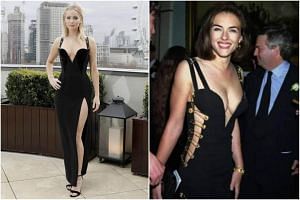 "This is sexist, this is ridiculous, this is not feminism,"she added.

"It's creating silly distractions from real issues. Get a grip people"

Red Sparrow, a thriller in which Lawrence plays a Russian spy, opens worldwide next week.