* This article contains spoilers for the series finale of Game Of Thrones.

NEW YORK (NYTIMES) - We could not expect every question to be answered, every subplot to be resolved, every character to get a proper goodbye. But Sunday's Game of Thrones finale certainly tried to tie a bow on as much of the story as possible.

Still, a lot of questions were left unanswered - fodder, perhaps, for any Game Of Thrones sequels that may arise in addition to the prequels. (Arya west of Westeros? John north of the North?) Here are a few we are still wondering about.

Why Is There a Night's Watch?

"There's still a Night's Watch?" Jon Snow asked Tyrion when he learnt he was being banished to the Wall. Fair question.

The White Walkers are wiped out. The wildlings are allies. The Wall is destroyed near Eastwatch, and the various castles along the Wall are unmanned. Is there any point in restoring them? Eastwatch at least, given its seaside location, could be rebuilt as a port town and trading centre. In any case, it is not entirely clear what someone sentenced to the Night's Watch might be required to do. What is its function now beyond leading the Free Folk home?

We got to see Ned Stark's companion Howland Reed only in the Tower of Joy flashback, and we heard about his legendary exploits only when Bran Stark discussed them with the Three-Eyed Raven and the Reed siblings. What happened to that guy? In addition to being one of the few people in Westeros who knows Jon Snow's true parentage (not from a vision, but from lived history), Lord Reed is also a loyal vassal to House Stark - so loyal that his children, Jojen and Meera, risked their lives to help Bran on his mystical journey. 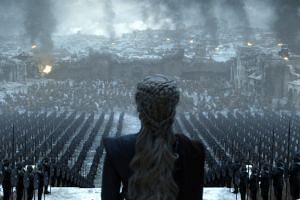 How Game Of Thrones has changed television

The best and worst scenes of Game Of Thrones

And yet House Reed was absent from the discussions about defending Winterfell, and it has not been heard from since Bran brushed off Meera with barely a thank you. We are still wondering about Jojen's visions, which suggested a fiery exit for Bran and Meera: "This isn't the end," he said. "Not for you. Not yet."

Dorne Is Not Done

Very late in the game, we got a brief mention from Varys that there was a new prince of Dorne. But who is he? How did he come to power when all the men in the Martell line were thought to have been assassinated by Ellaria Sand and the Sand Snakes?

That is true of all the men mentioned in the show. But there are more in the books, among them Quentyn Martell. Since the show didn't properly identify this new prince, are we expected to assume that it is Quentyn?

Who Was the Voice in the Flames?

Varys never got to learn what the voice in the flames said when a sorcerer used his body parts in a magical ritual. Kinvara once offered to tell him but never did. And now we will never know.

What Happened to What's-His-Name?

We never really got to visit many of the places in this world, but of the few we did, it would have been nice to learn what happened to a few of the locals we met along the way. In Pentos, for example, did Illyrio Mopatis, who hosted Viserys and Dany in Season 1 and Varys and Tyrion in Season 5, regret supporting a Targaryen restoration? In Qarth, did Quaithe, who seemed to have the power of premonition, ever take one last mystic look at Dany?

'Now our watch is ended': History-making Game Of Thrones wraps up

In Braavos, did Jaqen H'ghar, who taught Arya much of her craft, ever hear about the exploits of his favourite student? In Meereen, did Daario Naharis succeed in keeping the peace, despite having no real interest in doing so? Did Salladhor Saan ever recover the ships that Stannis borrowed? So many of these ancillary characters and their subplots were discarded by the show as it narrowed its focus and lost interest in the lands across the Narrow Sea.

Back in Season 6, Arya wondered, "What's west of Westeros?", and now that is her destination. Anything across the Sunset Sea is uncharted territory. The only known voyage there in the books was led by Elissa Farman, whom Dany had to thank for her dragon eggs, which Elissa stole from Dreamfyre to finance her trip.

Elissa long believed that there were undiscovered lands west of Westeros, and her crew first sailed south by south-west and found three exotic islands. She then headed west and was never seen again. Her ship, however, was spotted many years later in Asshai, which suggested that it might be possible to reach Essos by sailing west from Westeros. Perhaps one of the prequel successor shows will clear this up. Or maybe Arya will get her own spin-off.

Despite not having mentioned his wife for many years, Davos is still a married man as far as we know. Effectively, he abandoned his wife to go off to war with Stannis, then with Jon Snow, then with Dany. But did he return home to her after the Battle of Blackwater to share her grief over the death of their only son? No. Before he joined Stannis in Braavos, did he send a raven to let his wife know when he'd be home (and perhaps surprise her with his newly acquired literacy)? No.

When Jon Snow first took him to Dragonstone to meet with Dany, did Davos ask that they take a slight detour so he could check in at home? No. (Although he did find time to flirt with Missandei.) In all his travels back and forth across the continent, did Davos express concern for his wife at all? No. Is it not strange that a man who cares so deeply for others - treating Shireen like a daughter, Gendry like a son - never brings up his own family? We can only imagine the reception when he finally goes home.

Overdue Fees at the Citadel Library

Among his many exploits, Sam Tarly killed a White Walker, and then a Thenn, and then stole several books from the restricted section of the Citadel library. Did the maesters ever notice they were missing? Will he face any repercussions for this theft? Did becoming grand maester erase his late fees?

Also, if Sam helped Archmaester Ebrose write "The Chronicles of the Wars Following the Death of King Robert I", now titled "A Song of Ice and Fire", why would Tyrion not be mentioned? It seems that much of what we have learnt about the true history of Westeros may remain hidden from its people.

The baker at the Inn at the Crossroads knows how to bring people together. Will he ever get to play the game of scones?