(THE NEW PAPER) - I had breakfast in a streetside café with a school mate of mine whom I hadn't seen in years. He brought his teenage son and daughter, whom I'd never seen before, and he talked non-stop about the good old days while they didn't say word between "Hello uncle" and "Goodbye uncle".

She was listening to something on her MP3 player (her father said it was a popular singer called Lady A-Go-Go). She had earphones on so I was lucky not to hear where the Lady was go-going with her music.

Unfortunately she could be heard quietly moaning along with the music, like a panda in distress.

Luckily the son had some kind of computer game to play with and his contribution to noise pollution was less offensive - mainly faint beeps, toings and doots and an occasional angry reference to faeces.

My generation was brought up on golden rules such as "Children should be seen and not heard" and "Speak when you are spoken to" and "Listen and learn".

And since we grew up with neither MP3 players nor computer games, we just sat and listened.

Yes, we did learn exciting, highly relevant things - like how to control blood pressure by eating starfruit, how to reduce gastritis by drinking milk, and which type of stout had the best vitamins. 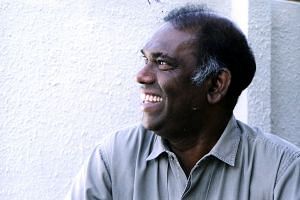 As soon as breakfast was over, my friend pulled out a small plastic case and emptied 10 pills of different shapes and colours on his plate, which he downed with French mineral water. He explained what each pill was for and why he chose that particular brand of mineral water.

After which he swallowed another five vitamins.

I began to believe by then that he probably had every adult disease (except possibly ovarian cancer). At one point, I half expected him to put on the table syringes, an oxygen mask, a defibrillator and a portable MRI scanner.

Then he pumped me for information on the best overseas universities for his son. He didn't demand much - simply a prestigious (but preferably cheap) university with low admission standards for boys with Nintendo skills, but with high pass rates, with many Asian students so the boy would not drink and take drugs or worse, come back with a foreign wife who would call him and his wife by their first names.

Strange ideasI asked him what his wife thought about this and he considered the questioned before saying he didn't know, and that it didn't matter because (a) he was paying and (b) she had "strange" ideas about everything anyway.

He went on to explain that she had given up on doctors and modern medicine and that she relied totally on natural remedies.

"She has this policy that she should never eat or drink anything that her grandmother never ate or drank. That's why my whole house smells like the inside of a traditional medicine shop," he said. "The only things missing are small dried animals, insects and bats."

I suggested that he might be better off sending his son, the Nintendo nincompoop, to a local institution so that he could conduct 24/7 surveillance on the boy.

"Who knows, your son might marry a local girl who won't call you by your first name. Mind you, she might have to feed him strange brews with tiger organs to make him leave his computer games and come to bed, but hey, at least he won't be a drug addict who has to keep popping pills day after day just to feel normal..."