Some of the biggest male stars in Asia, from Jay Chou to Aaron Kwok, all seem to have the same type: young models and starlets who look like dolls.

On Tuesday, Hong Kong pop star Kwok, 50, announced his romance with Fang, a Chinese model like his former girlfriend Lynn Hung, 35, but who is just 27. It is the first time he has acknowledged a girlfriend openly, and the media are hearing serious wedding bells. After his announcement, netizens searched Fang out, finding a trail of racy and modest photos she had shared online. 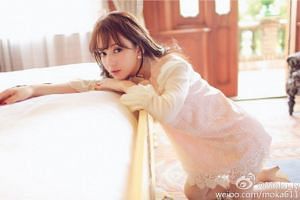 Rumour has it Kwok is something of a modeliser. He is said to have followed various models, including Fang, on Instagram, reports Apple Daily. But it looks like she is the one he hearts the most. For now.

Actors Angelababy, 26, and Huang Xiaoming, 38, wed this year. She was a young Hong Kong model and he, a top Chinese leading man, when they began dating in 2009. At the time, she did not have much of a career, and could fly frequently between Hong Kong and China to visit him, according to Apple Daily.

Chinese fashion blogger Zhou, 27, is the first girlfriend to have been acknowledged by Taiwanese singer Show Lo, 36, but only after they were photographed at the same hotel in Shanghai in May. Zhou, who shares many photos of herself looking like a life-size doll, has been nicknamed Little Angelababy.

TVB's most eligible bachelor, Cheng, 46, is dating his young colleague, beauty queen Chan, 24. Apparently, they fell in love on the set of an upcoming Hong Kong show, Blue Veins.

She is only the second girlfriend he has acknowledged, despite his rumoured romances with actresses including Niki Chow and Annie Liu. The other girlfriend he acknowledged was singer Linda Wong, back in the 1990s.

Chou, Mandopop's king of cool, had dated singer Jolin Tsai and host Patty Hou before model Quinlivan. But it was Quinlivan, 22, who melted Chou, 36.

Things heated up between them after he cast her as his girlfriend in a music video of How Are You in 2011. When the media got wind of the romance, he reshot the video with model Chloe Wu to shield the relationship from paparazzi.

Chou, who suffers from ankylosing spondylitis, a form of arthritis, has said he was touched by Quinlivan's devotion during one of his painful attacks. They wed in January and had a daughter, Hathaway, in July. The baby's name, Chou has said, is short for "Hannah thaws Jay".