Comedian Louis C.K. might be the biggest Hollywood mover and shaker you have never heard of, with his unorthodox moves

American comedian Louis C.K.'s frank, filthy and philosophical brand of funny has made him an undisputed star in the United States and, according to Forbes magazine, the third-highest paid comedian in the world after Jerry Seinfeld and Chris Rock.

But C.K. might be the biggest Hollywood mover and shaker you have never heard of, boldly bypassing the television networks to independently finance and produce one of his own shows, Horace And Pete, then distributing it from his website.

And he released the critically acclaimed series with no fanfare, in keeping with an overall reluctance to self-promote, which also means the comic gives few interviews.

The Straits Times manages to corner him, however, at a recent Los Angeles press day for Better Things - an acclaimed comedy drama about the struggles of a single parent that he co-writes with Pamela Adlon and which airs in Singapore on FX.

His unorthodox career moves are merely an attempt to get back to the basics, he says. "I keep trying to find a place to work where there's nothing but the work, where there isn't the spectacle of the success of the work, and you don't have to keep going (one) way."

These moves are being closely watched in an industry where the ground is shifting dramatically, with film studios and TV networks trying to keep up with streaming services such as Netflix and Amazon, not to mention interlopers such as Apple and Facebook, which are gearing up to make their own original programming too.

One thing I don't ever want to do is make a bad episode of that show just so I can keep it going. That's why I stopped - I felt I'm not sure they'll keep being good, so I want to stop until I know they will be.

AMERICAN COMEDIAN LOUIS C.K. on putting his hit show Louie on an indefinite hiatus in 2015 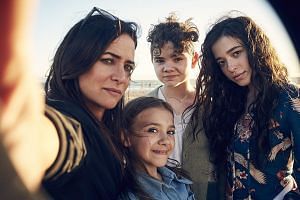 Fired actress Pamela Adlon scores with show based on her life

C.K., who was born Louis Szekely, took an altogether different tack after creating Louie, in which he plays a tragicomic version of himself: a middle-aged comedian and divorced father to two young girls.

Debuting in 2010, it aired on a cable network in the US and was a critical smash, bagging two Emmys for Outstanding Writing for a Comedy Series (2012 and 2014) for C.K., who has racked up 39 Emmy nominations and six wins for this and his televised stand-up.

Louie broke the mould for TV comedies with its experimental and auteurish sensibilities, featuring everything from an homage to surrealist master David Lynch to a sudden detour to China, shot on location in Beijing.

But instead of making a sixth season, he put the show on an indefinite hiatus in 2015.

"One thing I don't ever want to do is make a bad episode of that show just so I can keep it going. That's why I stopped - I felt I'm not sure they'll keep being good, so I want to stop until I know they will be," he says.

Instead, he secretly wrote, directed and starred in another groundbreaking series, Horace And Pete, a comedy drama about the denizens of a Brooklyn dive bar, played by Steve Buscemi, Alan Alda, Edie Falco and Jessica Lange.

He has also employed the same do-it-yourself strategy for his stand-up specials - and profitably too.

Horace And Pete, whose streaming rights video-on-demand service Hulu bought last year, has been profitable too.

Asked to compare his unorthodox trajectory with similar moves being made by film-maker Steven Soderbergh - who eschewed the usual studio marketing and release strategy for his recent movie Logan Lucky - C.K. says they have a lot in common.

"I think he and I both look for ways to go back to square one and work in a vacuum and see who comes to it, instead of people watching what you make because they like the last thing.

"Which is terrific, but, if you can, keep casting out further into more unfished waters," says the star, who this month unveiled yet another secret project, a black-and-white film with Chloe Grace Moretz and John Malkovich called I Love You, Daddy, the US$5-million sale of which was the biggest deal closed at the Toronto International Film Festival earlier this month.

It is not altogether surprising, perhaps, that a comedian has become as influential as C.K.. Comedians as a whole are enjoying unprecedented status in Hollywood right now.

Louie - the most successful TV show about a comic since Seinfeld (1989 to 1998) - probably opened the floodgates for other loosely autobiographical stories by professional funny men and women, including Aziz Ansari's Emmy-winning Master Of None (2015 to present) and, this year, Kumail Nanjiani's movie The Big Sick and Pete Holmes' series Crashing (not to be confused with a British series of the same name).

Many are also raking it in lately, in no small part because of a boom in hour-long comedy specials being financed by Netflix, including two specials C.K. has done for the streaming service - a deal Forbes believes accounts for more than half the US$54 million he earned between June last year and June this year.

But while he has become something of a media mogul, C.K. - whose stand-up offers piercing takes on everything from gender and smartphones to politics and parenting - still has to tread the boards to perfect the craft.

"For me, it all takes place on stage, show after show. I toured for two years to get ready for that Netflix special. All I did was refine and refine it and figure out that this is the best way to express these ideas.

"You hear the audience, it's like hitting the ball against the wall, and you start learning how the wall is shaped," says the star, who has two daughters, aged 15 and 11, with ex-wife Alix Bailey, an artist.

How far he has come career-wise does surprise him somewhat - but also not. "It does when I have a long view of it - when I think about when I was a kid and was raised pretty poor and not expecting much out of life.

"But I know how I got here and all the steps. And I'm 50, so it's not an overnight-success thing."

He also believes success was never inevitable, adding that if he was not doing this, he might have worked as a mechanic because "I used to fix cars and I kind of liked that".

"The same road that I took to get here could've been to nothing - I could've ended up doing all those things and not getting here. I wouldn't have been surprised by that, either."

Fired actress scores with show based on her life