LOS ANGELES • You would not think that former fitness guru Jane Fonda would include plastic surgery in her look-good regime, but she did.

"I'm glad I look good for my age, but I've had plastic surgery," People magazine cited the now 80-year-old as saying.

"I got tired of looking tired when I wasn't," she explained, admitting that she felt the career necessity to look svelte in Hollywood.

"On one level, I hate the fact that I've had the need to alter myself physically to feel that I'm okay.

Fonda revealed that she had work done on her eyes and jawline. 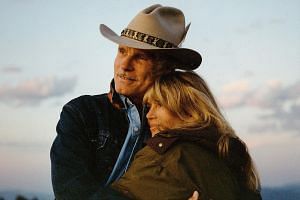 But now, steering clear of cosmetic enhancements, she has one simple tip to look good in older age.

"When I stand up straight, it's a whole different thing," she revealed in a new HBO documentary about her life, titled Jane Fonda In Five Acts. "Your age is less chronological and more attitudinal."

The Oscar-winning actress also walks the talk of not easing up on exercise in one's golden years.

On her part, she works up a good sweat regularly, "just more slowly now", and is a fan of Pilates.

In an interview with The New York Times, she said she came to terms with her worth and beauty only when she was in her 60s.

"I'm still a work in progress. You know, when your father (iconic actor Henry Fonda) doesn't show up for you or isn't able to really show you that he loves you unconditionally, then you spend a lot of your life trying to be lovable rather than authentic."

Jane Fonda In Five Acts moves from her painful childhood, including her father's affair and her mother's suicide, to her trajectory from an unambitious ingenue to an Oscar winner for Klute (1971) and Coming Home (1978).

It also grapples with what she has called her biggest regret: her 1972 visit to North Vietnam, which resulted in a photo of her seated on an anti-aircraft gun, earning her the nickname "Hanoi Jane".