To play a superhero fighting aliens in space, Hollywood star Brie Larson trained every day for nine months. She did judo, lifted weights and once, she even pushed a jeep uphill.

"To see what I was made of and how strong I could get," said the 29-year-old.

Together with her co-stars Gemma Chan and Samuel L. Jackson, as well as the movie's directors, Anna Boden and Ryan Fleck, the blonde star was in town yesterday to promote the upcoming Marvel Studios' film, Captain Marvel, which opens on March 7.

In the superhero movie set in the 1990s, Larson plays Carol Danvers, who becomes one of the universe's most powerful heroes and finds herself at the centre of a galactic war between two alien races.

At a press conference at Marina Bay Sands Expo and Convention Centre, before an estimated 350 members of the media from countries such as Japan and New Zealand, the star, dressed in a long, flowing beige dress, effortlessly commanded the room with her strikingly confident demeanour.

The actress won the Academy Award for Best Actress in 2015 for her role as a locked-up young mother in the drama Room.

She said of the preparation process for Captain Marvel: "It changed my mind. It changed the way I viewed the world, especially martial arts."

For example, once Larson started doing more judo, she said: "I was like, 'Oh, that guy has a gym jacket on. I could totally throw him right now.'"

The actress certainly relishes the tough training. She said: "There is something about pushing yourself beyond a threshold that is comfortable, then going even further. 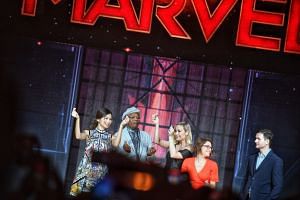 Chan, 36, who was socialite Astrid in last year's movie Crazy Rich Asians, describes the geneticist Doctor Minerva she plays in Captain Marvel as sarcastic and having many sassy one-liners.

She said the two roles "really couldn't be further apart". To portray the latter, she too had to challenge herself physically, and had to do kick-boxing as well as undergo sniper training.

"The main thing... I had to be concerned about (while filming) was trying not to hit myself in the face with my own rifle."

For Jackson, 70, playing a younger version of Nick Fury, from the fictional peacekeeping and spy agency S.H.I.E.L.D., meant he did not have to put on the character's distinctive scar and eye patch.

"It was kind of interesting being that guy (the younger version). Along with having two eyes, (my character has) a lot less instinct than the older Nick Fury."

Appropriately enough for a movie about female power, Boden is the first woman director to helm a Marvel superhero movie.

She said the experience has been "really amazing", but added: "It is 2019.

"I think everybody here looks forward to the day when it is not newsworthy that a woman is directing this kind of movie."