Once fired for having no sex appeal, actress Pamela Adlon now writes, directs and stars in her own acclaimed television show, Better Things, which is based on her real-life experiences as an older actress and single mother to three girls.

And being sacked from a TV show in the early 2000s is how she met comedian Louis C.K., her long-time friend, collaborator and co-creator of Better Things.

"I got fired. But 'no t**s' is, I think, a metaphor," says Adlon, 51, explaining that the producers of the show in question simply did not think she had sex appeal.

He says: "When I was casting Lucky Louie, a series I had on HBO in 2006, I wanted to cast a wife who was a real, complete and funny person."

They were speaking at a recent press event in Beverly Hills. 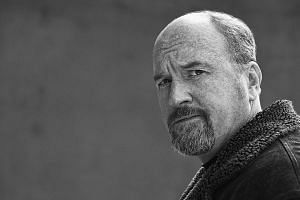 C.K. adds: "He said, 'I worked on a show and this woman was the funniest woman I had ever worked with, but she got fired because she had no t**s.'

"And she came in and was unlike anybody else I'd seen doing comedy acting. When she came in to play the mum, she looked like a tired mum who was failing at being a mother, which you're just not allowed to show."

The story of her firing features in a Season 1 episode of Better Things, with Rosenthal playing himself.

The show - the second season of which airs on FX on Fridays at 10pm - also borrows freely from other tribulations in her life, especially when it comes to her three daughters with ex-husband Felix O. Adlon, the son of German director Percy Adlon.

C.K. says when he and Pamela Adlon first met, he wondered how she juggled work and her kids.

"I said, 'How do you do it all?', which is a question she gets a lot. And she said, 'I don't - everybody gets screwed.' And the way she talked about being a mother, I liked it - it was funny to me."

That plain-speaking perspective on parenting infuses the show, which sees Adlon's character Sam having to juggle a demanding mother, a distant ex-husband and three headstrong daughters.

In the first episode of Season 2, Sam has to bite her tongue when her oldest girl, a teenager, starts dating a man in his 30s - another detail ripped from her own life.

"My oldest daughter had this a**hole (boyfriend) - it was a nightmare," admits Adlon, who has an Emmy nomination for Outstanding Lead Actress in a Comedy Series for the role. "But the more I would say things, the harder they would go towards each other and it was out of my control.

"And so I kind of learnt from other parents and other scenarios. Like, I let boys sleep over, not necessarily in the same bed. You try to stay on top of and monitor it. You just try to keep hold of what you can without scaring everybody away," says the actress, who also appeared in the series Californication (2007 to 2014).

And just as he encourages Adlon to crib from her own life for Better Things, she does the same for him when it comes to his loosely autobiographical series Louie (2010 to present), which she co-wrote and guest-starred in as his girlfriend. She was nominated for an Emmy for the role.

C.K. says: "I've called her sometimes after a terrible moment in my life. Here I am seriously upset and I'm expecting, 'Oh my god, are you okay?' But she just laughs so hard and I'm astonished that this is a funny thing. And then she tells me, 'You know you have a new bit, you have a new script.'

"A lot of my favourite work that I've done has started with that conversation."

A version of this article appeared in the print edition of The Straits Times on September 27, 2017, with the headline 'Fired actress scores with show based on her life'. Subscribe
Topics:
More
Whatsapp Linkedin FB Messenger Telegram Reddit WeChat Pinterest Print Purchase Article Copy permalink