The story: Ferdinand is a bull who is a lover, not a fighter - despite being built and bred for the bullfighting ring. Voiced by another gentle giant, American pro-wrestler John Cena, he bolts from a breeder's ranch in Spain and is taken in by the daughter of a flower farmer, with whom he lives an idyllic existence until a misunderstanding leads him back to the bullfighting ring.

It is not going to win too many prizes for originality, but you could do worse than take your kids to see this well-intentioned movie.

Based on a popular 1930s children's book, the story has been analysed to bits by grown-ups ever since.

Europe's fascist leaders saw it as pacifist propaganda: It was banned in Francisco Franco's Spain and burned in Adolf Hitler's Germany as a result.

This modern version by Carlos Saldanha, director of the Rio and Ice Age films, continues to function as allegory and inkblot, albeit rather simplistically.

There is an anti-bullying, be-yourself message that bears repeating, although the story perversely imagines that bulls bred for fighting compete with one another to be chosen for the ring, while also dodging the larger question about the ethics of this bloodsport. 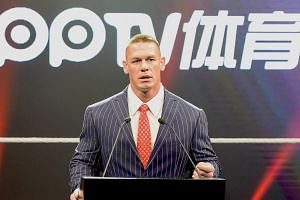 As with many animated films about animals, different species are also randomly assigned national and other stereotypes. Here, for instance, a group of Lipizzaner horses have over-the-top Austrian/ German accents and are inexplicably snooty and campy.

The visual and verbal humour is cartoonish rather than clever and it recycles gags seen in far too many animated films, such as animals in a high-speed car chase.

Some jokes hit the spot, though, especially a brilliant extended riff on the phrase "a bull in a china shop".

And this straightforward story does have some bite, notably in its defence of non-conformity.

It works especially well as a critique of gender stereotypes - in particular, rigid ideas about masculinity that equate having a brawny physique with outdated notions about macho-ness and aggression and view wanting to stop and smell the roses as somehow deviant and/or feminine.

For kids, cheering on Ferdinand as he wriggles free of the social straitjacket imposed on him is as good a way as any to learn this.

A version of this article appeared in the print edition of The Straits Times on December 20, 2017, with the headline 'Ferdinand is a bull in a china shop'. Subscribe
Topics:
More
Whatsapp Linkedin FB Messenger Telegram Reddit WeChat Pinterest Print Purchase Article Copy permalink