There are Star Wars fans who memorise dialogue from the films and there are those who buy enough merchandise from the franchise to fill warehouses.

Then, there are fans such as Mr Stefan Cembolista, 49, a Belgian whose weekend pastime is building life-sized replicas of items from the films.

As the chairman of the Belgian Costume Division, a group of people who share his hobby, he has overseen the building of everything from a towering 5.5m-tall transport and combat vehicle AT-AT Walker from The Empire Strikes Back (1980) to the medical bay in the same film, where a scarred Luke Skywalker recovers from his battle injuries.

Most of the time, these props are built based on crowd-sourced information, but the team has also received input from Lucasfilm, which produces the Star Wars movies, for more accurate reference details. These replicas are typically displayed at pop-culture events around the world.

At the Star Wars booth at the upcoming Singapore Toy, Game & Comic Convention on Sept 9 and 10, Singapore fans will get to see two installations built by Mr Cembolista and his team.

The first is the Speeder vehicle, which was prominently driven by heroine Rey in The Force Awakens (2015) movie, as well as the interiors of the iconic Millennium Falcon spaceship, driven by Han Solo and Chewbacca. 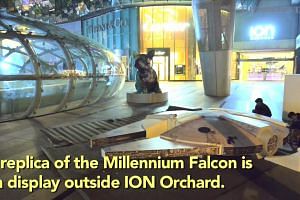 The interior of the Falcon set is especially impressive standing at about 8m tall, and features the famous circular walkway as well as the holographic chess table where droid C-3PO advises R2-D2 to let an upset Chewbacca win the game. In an e-mail interview with The Straits Times, Mr Cembolista – whose day job is handling the marketing of, well, Star Wars merchandise and collectibles at a toy distributor – says “the Falcon is a work of constant improvement”.

“We are always adding new details and sections to it.”

He has spent so much time and effort on his prop-building projects that he counts this as his unofficial second job, except that he does not get paid to do this.

Then again, when you love something this much, it hardly feels like work.

Mr Cembolista, who says he was hooked on Star Wars since he saw the first movie A New Hope (1977) at the age of nine, knew that there was no turning back.

“As soon as the Stormtroopers invaded the ship and Darth Vader appeared, I knew that this was totally my thing.”

A version of this article appeared in the print edition of The Straits Times on September 01, 2017, with the headline 'Fan boy with passion for film replicas'. Subscribe
Topics:
More
Whatsapp Linkedin FB Messenger Telegram Reddit WeChat Pinterest Print Copy permalink