Australian pop icon Kylie Minogue, one of the top stars at the Formula One Singapore Airlines Singapore Grand Prix next weekend, has had her fair share of intimate Formula One experiences.

"I have been in the pit stop, which was very exciting. I thought, 'My dressing room is not as clean,'" she says with a laugh.

There was a time she could not understand why F1 fans like her brother, Brendan, would stay up till 3am "watching cars go round and round" halfway across the world, she adds in a telephone interview from London.

All that changed when her sister and fellow singer Dannii dated Canadian Formula One driver Jacques Villeneuve in the late 1990s and early 2000s.

"Because of the connection, I got to see races. And then I got quite into the competitive nature of it and the soap opera of the different teams, the tactics and all of that, so now I understand it more and yeah, I think it's exciting."

Her concert at the Marina Bay Street Circuit's Padang stage on Sept 16, the first night of Formula One, will be her third in Singapore. Minogue, 48, performed at the Singapore Indoor Stadium in 2011 and 2008. 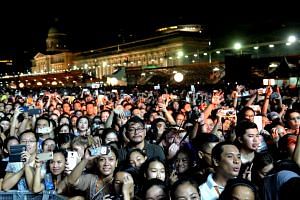 Formula One: Final shot to win $5,000 worth of tickets to Singapore Grand Prix

Her best memories here are the "really good crowd", nice weather and shopping - she remembers buying a Fendi handbag in Singapore.

Arguably Australia's most prominent music export, the 1.52m-tall singer's enduring entertainment career dates back to the early 1980s and she is well known for her transformation from doe-eyed, girl-nextdoor actress to sultry pop queen and gay icon in the following decades.

In 2011, she was inducted into the Aria Hall of Fame, the Arias being the Australian version of the Grammys .

Born to a former ballet dancer mother and accountant father, Minogue started taking on roles on Australian television at the age of 11. She became a household name after she started acting in soap opera Neighbours in 1986, a show which became wildly popular in Australia and Britain.

Her first single, Locomotion, released the following year, became an international smash hit and was Australia's biggest pop hit in the 1980s.

Looking back at those heady days, she says she never thought her career would still be going strong decades later.

"No, I couldn't even fathom 2016," she says. Adopting a mock-dorky voice, she quipped, "What, the millennium?

"I don't know if this is a good or bad thing, but I've never been a long-term planner. I didn't have much foresight back then, I just knew that this was what I wanted to do and the opportunities presented themselves and I worked hard when they did."

In the 1990s, she ditched her wholesome public image for a more flamboyant, risque one as her music evolved from bubblegum pop hits such as I Should Be So Lucky (1987) to club-oriented dance tracks such as Can't Get You Out Of My Head (2001), one of her biggest songs to date.

She has since released 13 studio albums and, according to the BBC, has sold more than 70 million records worldwide. Her most recent full-length album, Kylie Christmas, was released in November last year, and she recently revealed that she will be releasing a new duet with British singer Robbie Williams in the near future.

Since ending her stint on Neighbours in 1988, she has returned to acting several times over the years. She had a small role in last year's San Andreas, a Hollywood disaster flick starring Canadian-American actor and former wrestling star Dwayne "The Rock" Johnson.

"I can't tell you how many people said to me, 'I watched San Andreas and you were in it!' (My role) wasn't that publicised. I'm a big fan of The Rock, as is everyone, so it was fun to have that cameo."

In 2005, she was diagnosed with breast cancer and underwent chemotherapy. She has since been given the all-clear.

In February, Minogue, who has never married, announced her engagement to her current beau, 28-year-old British actor Joshua Sasse. The pair met when they acted in the American musical television series Galavant.

Wedding bells might not ring any time soon, though.