Concert promoters Live Nation said in a statement that the remaining 21 US dates on West's Saint Pablo tour had been cancelled, and that tickets would be fully refunded.

Live Nation gave no reasons, fuelling speculation about the state of West's mental and physical health.

A source close to the "Gold Digger" singer denied West was having some kind of breakdown, telling celebrity outlets People and Us Weekly that West was a workaholic who was simply worn out.

"He's just exhausted. He's been working around the clock on fashion design, both on his own line and the Adidas line. He's a notorious workaholic, so balancing both that work - which is extremely important to him - and the rigours of the tour every night, it really wore him out," a source told People. 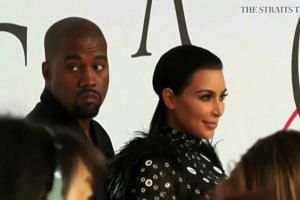 The tour cancellation followed a demanding three months for West, who unveiled the new season of his Yeezy fashion line with an elaborate performance art event in September in New York.

In October, West's reality star wife, Kim Kardashian, was robbed at gunpoint in Paris, forcing the family to reassess their security and their high public profile.

The influential rapper, who is promoting his current album"The Life of Pablo," made headlines last week when he was booed at his San Jose, California concert for declaring his support for US President-elect Donald Trump.

He cancelled a concert in Los Angeles at the last minute on Sunday, and on Saturday walked off stage in Sacramento, California after 30 minutes during which he took aim at Beyonce, Jay Z, the media, and the music industry in general.

Billboard magazine estimated that the tour cancellation would mean US$27 million (S$38 million) in ticket refunds and untold amounts in other tour expenses.

West has a history of unpredictable and controversial behavior.

Last year, he declared he was considering running for US president in 2020.

In 2009, he interrupted Taylor Swift's acceptance speech at the MTV Video Music Awards in New York saying the honour should have gone to Beyonce.

In 2006, he posed as Jesus Christ on the cover of Rolling Stone magazine, and earlier this year he released a music video for "Famous" featuring portrayals of nude celebrities including Trump, Swift and comedian Bill Cosby lying asleep in bed with him.