CHICAGO (REUTERS) - A grand jury in Chicago has returned a 16-count felony indictment against television actor Jussie Smollett, accusing him of falsely reporting to police that he was the victim of a hate-crime assault, local media reported on Friday (March 8), citing court records.

Smollett, who is black and openly gay and plays a gay character on the Fox network hip-hop drama Empire, was previously charged in a single-count criminal complaint with lying to police about a supposed racist and homophobic attack on Jan 29 by supporters of President Donald Trump.

A spokeswoman for Smollett, 36, who was arrested and later released on US$100,000 (S$130,000) bond two weeks ago in connection with the initial charge against him, did not immediately return a call or email seeking comment.

An attorney for the actor could not immediately be reached for comment.

At least two local television stations reported that a Cook County grand jury charged Smollett with 16 counts of disorderly conduct for allegedly giving false accounts of an attack on him to police investigators.

At the time he was initially charged, Chicago's police chief said that Smollett had paid two brothers to stage an assault on him.

According to previous police accounts, Smollett reported that two masked men approached him on a darkened street shouting racial and homophobic slurs, struck him in the face, doused him with an "unknown chemical substance" and wrapped a rope around his neck before they fled. 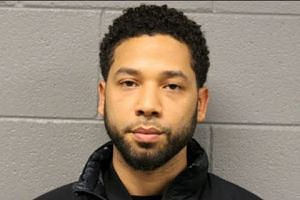 According to the account, the attackers had shouted, "This is MAGA country," referring to Trump's "Make America Great Again" slogan.

Smollett took himself to a hospital but was not seriously hurt, police had said.