What do you do if a studio refuses to make a sequel to one of your favourite films?

Well, if you are a comedienne with your own top-rated talk show, you can always pressure it by making jokes about how annoyed you are - and keep that up for six years.

Ellen DeGeneres likes to think this is why Pixar, the award- winning animation studio, eventually made Finding Dory, the follow-up to its beloved 2003 hit Finding Nemo. The latter won the Oscar for Best Animated Feature, earned more than US$936 million worldwide and remains the best-selling DVD of all time, with more than 40 million copies sold.

Speaking to The Straits Times and other press in Los Angeles ahead of the sequel, which opens in Singapore this week, the 58- year-old says: "I just want to state that I am responsible for every penny that this film makes.

"Because this film would have not happened had I not campaigned as hard as I campaigned," she says, tongue in cheek. 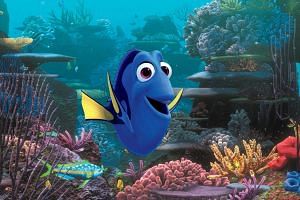 "Thank god I had a talk show to talk about it. I had a platform."

The comedienne is the voice of Dory, the lovable but forgetful blue tang fish who was a supporting character in the first film, about the search for a young clownfish named Nemo taken from his home.

In Finding Dory, it is her turn to try and locate her own parents, whom she was separated from years ago.

Andrew Stanton, who directed and co-wrote both movies, says the sequel took a while because he was initially resistant to making one, and then he struggled to pin down the plot.

But even though DeGeneres never pressured him or Pixar directly, she could not resist taking cheeky digs at them on The Ellen DeGeneres Show. "It just seemed like it was obvious. I mean, the film was an iconic film, it won the Academy Award," she says.

"And then the joke became a reality and then it became about Dory's journey. So again, I'm responsible for everything that happens from now on."

Finding Nemo marked the start of a career upswing for DeGeneres, who in 2003 was still smarting from the failure of her short-lived sitcom The Ellen Show (2001 to 2002), which had been cancelled due to low ratings.

But her new syndicated talk show, The Ellen DeGeneres Show, was a runaway success. Now in its 13th season, it has won 36 Daytime Emmys and turned its charming host into a major media figure who, according to Forbes magazine, was the 50th most powerful woman in the world last year.

The show also established the former stand-up comic - who came out as lesbian in 1997 - as one of America's biggest gay icons.

Her involvement in Finding Dory was perhaps one reason some fans thought they saw a lesbian couple in the trailer for the film, prompting endless analysis of the clip online.

Asked to confirm whether the two women seen in the background are gay, the director of the film says: "They can be whatever you want them to be. There's no right or wrong answer."

Producer Lindsey Collins adds: "We never asked them. We have not asked that of any of the couples in any of our movies."

DeGeneres, who is married to actress Portia de Rossi, 43, weighs in on this too, saying: "When I watched it, I was looking for that particular scene and it appears that there are two women - and one woman has a very bad short haircut.

"Which I find very offensive, that that's the definition of a gay woman. How dare you," she deadpans. "Just because someone has a short bad haircut doesn't mean she's gay. She just has a bad haircut."

Jokes aside, she believes it is a good thing that people are discussing things such as this, along with the calls for greater diversity on screen - including the current online petition to give animated hit Frozen's (2013) heroine Elsa a girlfriend.

"I think everything we see in the media, whether it's television or film, should represent everything that's happening in the world. So it's a great conversation, whether they intended that woman with the short haircut to be gay or not."

DeGeneres also believes that for younger viewers, the acceptance of diversity is one of several important messages in Finding Dory. Dory is shown celebrating her friendships with those who are different from her, dealing with a personal loss and persevering despite her shortcomings.

This is why it is "so much more than a cartoon movie", says the star.

Burrell, the 48-year-old star of the sitcom Modern Family (2009 to present), says like many Pixar and Disney films, this one "goes deep".

The father of two girls aged six and four says: "They're addressing stuff, including loss, that I think kids have some awareness of. And I think the way Pixar does it - with characters that are all well- intentioned and trying to do their best - it's a world that feels safe for them to approach those topics.

"That's been my experience at home with a lot of Pixar and old Disney films: You get into real conversations, even at four and six."

Olson, a 40-year-old actress from the television comedy It's Always Sunny In Philadelphia (2005 to present), found Dory's learning difficulties a good opportunity to reinforce a lesson she has been teaching her four- and five-year- old sons.

"Like all kids, they get really frustrated when they don't do something perfectly. And at home, we've been talking a lot about how there's no such thing as perfect and it's not what you should be striving for. Doing your best and having fun are what's important."

Dory's friendships with Olson's character, a short-sighted whale shark, and Burrell's, a beluga whale whose sonar is not working, also tell children that "if you don't have a family, you can create a family", she says.

And, DeGeneres adds, "that we can all get along - no matter that we're all different kinds of species, and look different and have different traits".