Hong Chau, who drew on her refugee past for her role in the science-fiction satire, is the critics' darling this awards season

For her breakout performance in the science-fiction satire Downsizing starring Matt Damon, actress Hong Chau drew on her past as the child of Vietnamese refugees.

The film, which opens in Singapore today, envisions a world where some people choose to be irreversibly shrunk down to the size of toys to drastically reduce their living costs.

Chau, 38, plays Ngoc Lan Tran, a feisty Vietnamese dissident who flees the country after being forcibly shrunk while in prison.

The performance has made her the darling of critics this awards season. Some are predicting an Oscar nomination for her, following Best Supporting Actress nods from the Screen Actors Guild, Critics' Choice Awards and Golden Globes (which she lost to Alison Janney in I, Tonya).

Speaking at a recent screening of the film in Los Angeles, the actress notes that like her character, her parents had no choice but to make the best of a bad situation.

Chau was born in a Thai refugee camp three months after her mother and father left Vietnam as boat people in 1979. The family then resettled in Louisiana, where they were taken in by a sponsor family, but continued to experience hardship and poverty.

Seeing what her parents went through informed her character in Downsizing, she says.

"The father of the sponsor family was a butcher, so my dad, out of obligation, went to work as a butcher with him, even though that's not anything that he wanted to do. My parents had a coffee shop in Saigon before they came over.

"So, you do things out of necessity and not so much by choice."

Chau has not had the easiest ride in terms of her career, either.

She had no acting auditions for a year before she finally landed the part in Downsizing. This is only her second big-screen appearance after playing a massage-parlour worker in Inherent Vice (2014), which followed a string of bit parts on television.

She is getting glowing notices for her acting, but some critics are taking issue with the fact that her character in Downsizing speaks broken English with a thick Vietnamese accent - this is sometimes the punchline. One reviewer called it a "racist caricature".

Chau - who speaks perfect English with an American accent - has defended her decision to voice the character this way, saying she based it on the Vietnamese refugees she had grown up around and for whom English was not a first language.

She also wants to clarify that the character's steeliness is not a by-product of Vietnamese culture, but rather the refugee experience. 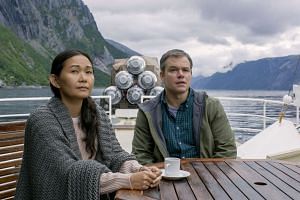 Downsizing is a meandering satire of American consumerism

"A lot of people, when they describe my character to me, say, 'Oh, she's harsh and fiery. And I feel like a lot of people assume that that's innate to the culture, and it's not. You sort of develop those things because of all the tumultuous events that have happened in your life and probably a lot of violence and internalised trauma.

"So, it's about something much deeper and more profound."

Alexander Payne - the thrice Oscar-nominated director behind Nebraska (2013), Sideways (2004) and The Descendants (2011), for which he won the Best Adapted Screenplay Oscar - praises Chau's interpretation of the character.

"There's a madcap quality to Hong's performance that I like very much - it's a little Lucille Ball-ish," he says.

The 56-year-old film-maker has directed veteran stars such as George Clooney, Jack Nicholson, Kathy Bates and Bruce Dern to Oscar-nominated performances, but says that despite Chau's comparative lack of experience, she needed "relatively little direction".

"The thing about her is that from the first audition, even before she met me, she had read the screenplay and clearly understood it.

"Then, with the character, she understood the rhythm of the dialogue, the nature of the comedy and also the pathos. And how to go nimbly from one to the other."

While the premise of the story seems firmly in the realm of science-fiction or fantasy, Payne believes that miniaturising people may be one of the few ways to address some of the biggest challenges facing mankind.

He and co-writer Jim Taylor "are convinced that 'downsizing' is the only solution for overpopulation and climate change".

The movie's strong political overtones are deliberate. But while they seem like a pointed commentary on the issues of today, the pair began writing the screenplay a decade ago, Payne says.

"We wanted to have something with a political or social-satirical consciousness to it. Then 10 years went by, the screenplay was hard to write, we couldn't get financing and finally did, and now, it's like, 'Oh, your film is so timely.'

"Well, none of the elements is new. They're just more potent now. Sadly, in 10 years, it'll be more timely."