South Korean actor Song Joong Ki was not cast as a soldier in The Battleship Island because he had played a soldier to huge popularity in the television series Descendants Of The Sun (2016).

Neither was child actress Kim Su An picked for the World War II movie because an earlier movie she starred in, Train To Busan (2016), was a huge hit.

Battleship's director Ryoo Seung Wan, who was in Singapore recently to promote the movie, said: "The script was sent to Song Joong Ki when he was still doing national service - that was definitely before Descendants Of The Sun came along.

"A lot of people have this idea that he was cast because of his role in Descendants, but actually I did not have time to watch the drama.

"When it comes to casting, I choose actors based on their acting and not their fame. I felt that Song Joong Ki would be able to portray his character well, I saw the character in him." 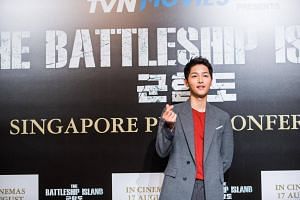 He was speaking to The Straits Times last Tuesday as part of the whirlwind publicity tour in Singapore with cast members Song, So Ji Sub and Hwang Jung Min.

The Battleship Island is Song's first production after rocketing to superstardom with Descendants Of The Sun, where love blossomed between him and his co-star Song Hye Kyo in reel and real life.

In the new movie, Song is a soldier sent on a mission to a forced labour camp on Japan's Hashima Island, known as Battleship Island.

Based on historical accounts, the thriller revolves around the Korean labourers exploited by the Japanese on the island during World War II.

Among the captives is a bandmaster's daughter, a role which required the young actress Kim to sing, dance and do cartwheels.

The 11-year-old was a natural fit for the role because she does cheerleading, says director Ryoo.

She also seems to possess a natural flair for acting.

"I've watched Kim Su An in a lot of movies. I was always taken aback and very impressed by her acting skills.

"I feel that she has a special talent," says Ryoo, who helmed espionage thriller The Berlin File (2013) and crime comedy Veteran (2015).

The director was inspired to make the blockbuster - on a massive budget of 22 billion won (S$26.6 million) - after he saw a photograph of the island in 2013.

"The image was so powerful. I was so overwhelmed when I found out the history of the island. I was really moved to bring the story to the public," he says.

Due to the sensitive nature of the island's history, he put much effort into the research - wading through historical records, meeting civilian activists and visiting it in 2015.

Despite the rigour of his research, he injected a dose of fiction to the movie, including a mass escape sequence.

He says: "As I made this movie, I had the desire to free the captive labourers, which didn't happen in real life. I wanted to do it through the movie to give a sense of closure."