SEOUL - Descendants Of The Sun heart-throb Song Joong Ki said he is a tad upset that his phenomenal fame has affected his privacy.

Song, 31, spoke at an interview last Friday in Seoul, his first since the hit drama wrapped on Thursday amid fans' fervour.

"I'm a little upset these days. My family has been exposed to the media," the Korea Herald quoted him as saying.

"Some people break into our house. My ex-girlfriend's photos are circulating online. To say that these are things I need to endure for the sake of celebrity... that's sad. I want to respectfully request that my private life remains private."

Old photos showing him hugging an ex-girlfriend, a non-celebrity, had hit the Internet recently. 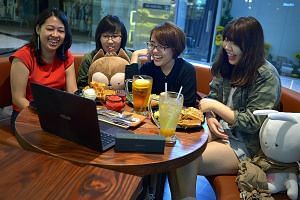 Fans say yes to Descendants Of The Sun’s finale 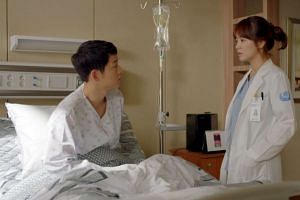 Descendants Of The Sun finale draws 38.8 per cent of viewers in South Korea

Fans wonder if he is, in real life, as masculine and a ladies' man as Captain Yoo Si Jin, the character he played in the drama.

Told that the film crew had revealed that he is a man's man and very masculine on set, Song said: "I'm not sure what the standard for being masculine is. I don't really know what they're referring to.

"Maybe it's because I pick up the tab for our after-work meals a lot," he joked. Cracking jokes is, in fact, the only similarity he and Yoo share, he said, as reported by the Herald.

"Yoo Si Jin likes to make jokes, and I do too. Even at this interview so far, I already made a few jokes," he replied to a question.

"If I were like him, I would have been much more popular. But do you think men like him really exist? As writer Kim (Eun Sook) said, it seems like a fantasy," he said of Yoo.