SINGAPORE - Some might say the age of music streaming has led to shorter attention spans, resulting in more artists preferring to release shorter works such as singles and EPs, or extended play, that contain a smaller collection of songs.

But, as The Straits Times finds out, there are younger and rising home-grown singers and musicians who still believe in a more old-school format - the LP (long play), or album.

In recent months, acts like singer-songwriters Glen Wee, Dru Chen and Boon Hui Lu have released full-length debut albums in both physical and digital forms, while others such as electronic pop quartet Disco Hue and pop singer Tabitha Nauser are currently working on their first long-form releases.

Many see the album as a calling card of their music artistry while others revel in the freedom and expansiveness the format affords, compared with shorter-form works.

For Disco Hue, putting out a full-length album is a sign of the band's growth. Since they formed in 2012, the quartet have released only singles and an EP.

Singer Sherlyn Leo, 23, says: "While singles would tell only part of our story, an album allows us to utilise the transitions between songs as part of the narrative as well."

Set to be released in the middle of the year, the album, titled The Yearbook, explores themes such as love and loss, growing up and moving on. "There's ultimately more space for nuances within the medium of an album that we feel would be suitable for our upcoming work," says Leo.

Nauser, 26, who has released three singles since 2017 - Bulletproof, Body Language and Rules - says albums are "a great marker of who and what I am musically at any given time".

"My music changes and so does my writing, and the albums provide an arc for audiences to follow throughout the years. But to be honest, as long as I get to put out music, I'll be happy either way."

Working on an album-length release lets some acts be more ambitious with their ideas. 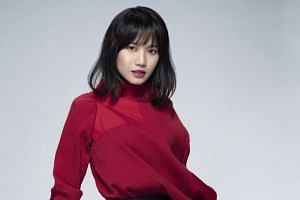 Symphonic metal band Sangriento crafted their debut album Blood Pact as a concept album, complete with a post-apocalyptic storyline and a graphic novel. It was released in January.

Drummer Christal J. Kuna, 28, says: "A lot of this project is new territory - we wanted to go heavily into the symphonic and operatic sound, the stage imagery and storytelling.

"We wanted to capture a dream we've had for years. At heart, it's just us wanting to create and communicate a story and create a world through our craft in a new way, the scope of which was larger than what a single or EP could afford."

Some acts take years to come up with their debut albums.

Singer-songwriter Chen, 29, who has previously put out only singles and EPs, released his debut album in early March. Titled Mirror Work, it comprises songs he has been working on in the last decade and chronicle the experiences of his late teens to his mid-20s, including falling in love, signing on to record label Warner Music, as well as working with his creative collaborators.

Chen, who grew up in Singapore and Australia, says: "I spent my late teens to mid-20s coming to terms with being a cultural alien in both (countries).

"I didn't think very much of myself as a person and so music was my compensation. Mirror Work details the healing process I undertook to fully accept and live with myself."

Wee, 26, who first made his name on reality television singing show The Final 1 in 2013, released his debut album in January, which he describes as "a log book of all my trials in this wonderful, continuous journey called life".

"There is just always something special about the first time to everything and because it's my first piece of work I'm sharing, in my perfect world, I've always wanted it to be an album," he adds.

"And even though in the age of streaming, the wiser business choice would be to go with singles and EPs, doing it how I wanted was a creative freedom of choice I have, and that I value more."

Electronic pop band Disco Hue is expected to release their first album in June, a follow-up to their 2016 five-song EP Arcade. Three singles have been released so far - Can't Be Mine, Right On Top (Back To You) and Call Me Back.

Home-grown, London-based electronic artist and pianist Kin Leonn released his debut album in December 2018. Known as a member of electronic trio Midst, the ambient producer and composer's music has been featured on American radio station KEXP and BBC radio. Commune was also featured as an album of the month on Japanese magazine Popeye.

Hip-hop newcomer Nikhil Senan raps about the human condition in his album, which was released in late 2018.

Symphonic metal band Sangriento's Blood Pact is a concept album complete with a graphic novel illustrated by drummer Christal J. Kun and a post-apocalyptic tale of a pair of orphan twins. The quintet launched it with a concert at Aliwal Arts Centre in January.

The former Singapore Idol contestant and radio DJ is set to release her as-yet-untitled debut album in the third quarter of this year. She describes the new tunes as songs that "talk about love" and will showcase her pop/R&B roots.