That Tom Cruise broke some bones doing his own stunts for Mission: Impossible 6 recently will not surprise anyone who has worked with the star before.

Just ask director Doug Liman and actress Sarah Wright, whom Cruise, 55, roped into some of his daredevil antics while shooting American Made, which opens in Singapore tomorrow.

The movie is inspired by the true story of Barry Seal, the larger-thanlife American pilot who, in the 1980s, smuggled drugs for a Colombian cartel while also spying for the United States government.

Speaking to The Straits Times and other press in New York recently, Liman - who directed Cruise in the 2014 science-fiction blockbuster Edge Of Tomorrow - confirms that Cruise always insists on doing his own stunts.

A licensed pilot, Cruise "did all his own flying in the movie", says the 52-year-old film-maker.

"I've never done something with a stunt double for Tom.

I've never done something with a stunt double for Tom. The most we've done is have a double do a scene once so Tom can watch it and see what it looks like, then he goes in and does it for real, and does it even better.

DIRECTOR DOUG LIMAN on how Tom Cruise does his own stunts

"The most we've done is have a double do a scene once so Tom can watch it and see what it looks like, then he goes in and does it for real, and does it even better.

"I think (director Steven) Spielberg said that Tom's the greatest movie director not currently directing movies because he can watch a double do a stunt and then be, like, 'Now I know what it looks like, let me do it', and make it really make sense for the camera."

The idea for that scene - which sees Barry and Lucy briefly floating upwards as the plane nosedives - came from a prank Cruise pulled on Liman.

"We were flying out to a little remote airstrip and we were going to shoot out there," the director recalls.

"Tom's flying the Aerostar and I'm in the back, where there are no seats because it's outfitted to transport cargo. It's a three-hour flight over nothing but trees and eventually, I fall asleep.

"I wake up and Tom's put the plane in a parabolic arc, and I'm literally slamming into the ceiling. Tom's, like, 'Oh s**t, sorry - I wanted to wake you up pinning you against the ceiling, but I didn't mean to hit you so hard.' 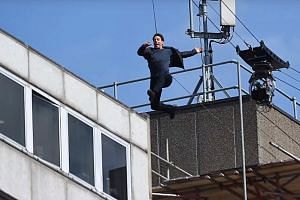 "Then we laugh about it and from that, we came up with the idea of having that happen with Barry and Lucy in the airplane."

"That was simulated using half of an airplane on a stage, where the plane was spinning like a washing machine.

She has also been in a plane Cruise was flying for real.

"He's the kind of person who, as a student, would read a book cover to cover 18 times before he wrote a report on it. So as a pilot, I think he's seen those manuals a lot and he also has a lot of experience flying."

She was initially overawed at the prospect of acting with the star, whom she had grown up watching in hit films such as Top Gun (1986) and Jerry Maguire (1996) .

As with several of his films, Cruise gave his blessing for the female lead in American Made to be a relatively unknown actress, something that Wright - who has had supporting roles on television series such as Marry Me (2014 to 2015) - is grateful for.

"He was incredibly inclusive and open and inviting, and he told me tons of stories about women that he'd worked with in the past.

"He had this great story about Renee Zellweger. Their movie, Jerry Maguire, was her first big deal and he said he'd walked in and was, like, 'This is the girl!' to the studio. I think it's really cool that he looks for somebody who doesn't necessarily have to be a name."

Liman, too, says it was a joy working with Cruise, who reportedly has two broken ankle bones from the building-jump stunt he attempted this month in London, where he was filming the sixth Mission: Impossible spy thriller due out next year.

After flying to that remote Colombian airstrip with Liman, Cruise gamely went along with a lastminute decision to camp in the jungle for the night because it was getting too late to fly back, and even went with Liman to buy camping gear.

"The two of us went to a camping store in a shopping mall in Medellin, bought what we needed, and when we were going to leave, there must have been 1,000 people who had filed in to meet Tom Cruise and there was no back way out.

"And Tom loves his fans, so I was, like, 'You're on your own, Tom - you're going to be here at least an hour signing autographs.'

"That is Tom - he's always up for the adventure."

Cruise also went along with a suggestion to pull his pants down and moon the camera in a few scenes.

Liman was not sure if the actor would go along with this at first, because "it's so un-Tom Cruise to moon the camera - that guy never has a hair out of place".

"But he's game for anything. I don't know how much more you can ask for as a director. We didn't know if it was going to work, but he said, 'Let's try it.'

"And I've never said anything to Tom that he's not game for trying."

•American Made opens in cinemas tomorrow.

A version of this article appeared in the print edition of The Straits Times on August 30, 2017, with the headline ''Cruise always up for adventure''. Subscribe
Topics:
More
Whatsapp Linkedin FB Messenger Telegram Reddit WeChat Pinterest Print Purchase Article Copy permalink