The story: Three years after the events of the last movie, Jurassic World (2015), the theme park remains abandoned and the dinosaurs rule the island.

But when a volcano erupts, former manager Claire (Bryce Dallas Howard) forms a team to evacuate as many of the creatures as she can and persuades former trainer and ex-boyfriend Owen (Chris Pratt) to join her rescue attempt.

After a series of disconnected movies, this one cements what is to be - and this reviewer shudders at using the u-word - the Jurassic universe.

Think of a world in which humans co-exist with giant reptiles and you have a general idea, just as humans and apes do in the Planet Of The Apes series, or humans and artificial intelligences do in HBO series Westworld.

Reservations about yet another universe aside, it would make a lot more sense to have a coherent world than what used to happen, when some flimsy excuse or other would have to be created to lure humans into the land of dinosaurs.

The foundation for a revitalised franchise is laid with a bang, literally, with a volcano eruption.

So this is a two-for-one - a disaster movie and survival movie. The plot gets even busier than that, when the location moves to a mansion on the mainland in the latter half of the film.

But before that happens, there is stuff that should remind viewers of the background to a few Marvel superhero movies.

The government has to decide if it should let the volcano sterilise the planet of dinosaurs.

On the pro-extermination side is Dr Ian Malcolm (Jeff Goldblum, reprising his role as dinosaur scourge from previous movies). 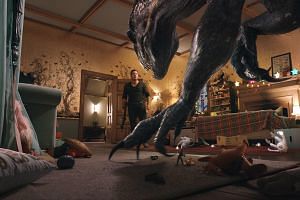 Michael Crichton: from print to screen

But the pro-dinosaur rescue team, led by Claire (Howard) will not stand idly by and soon - here are the money shots - we get scenes of humans trying to outrun raptors. Except now, there is hot lava raining down from the sky.

Despite the big set pieces, including the massive stampede to the sea shown in the trailer, there is a sense of having seen it all before.

Director J.A. Bayona says the film builds empathy for the animals forced to serve human needs, but viewers, nonetheless, come to be scared out of their wits by big teeth and claws.

That aim is better achieved in the latter half of the movie, when the Big Bad in this film is revealed: The Indoraptor, a beast genetically engineered to be smart and deadly.

Its guards boast about how its enclosure is the most secure ever devised and viewers know it is only a question of time before its jaws close around the guy doing the boasting.

The real hybrid here, however, is the movie itself. While more coherent than its 2015 predecessor, it stills feels lumpily composed of bits from other science-fiction and disaster films.