SINGAPORE - It was a night most sane Singaporeans would stay at home in their beds in their air-conditioned rooms, sleeping.

At midnight at Gardens by the Bay, movie director Jon Chu was making actors Constance Wu, Henry Golding and Michelle Yeoh do the same two-minute scene again and again, in the 30 deg C heat.

On the sidelines of the location shoot for Crazy Rich Asians, which will likely released in the middle of next year, Singapore actress Fiona Xie told the press that in playing Kitty Pong, the gold-digger from Hong Kong, she was an "Asian Marilyn Monroe, with Amy Winehouse hair".

The bun she sported added 15cm to her height and topped a face with make-up that made her look like a cross between Kim Kardashian and Cleopatra.

Chu revealed the secret for making actors look great in the heat - a team of 30 make-up artists, the largest he had ever used.

Rapper and comedienne Nora Lum, also known as Awkwafina, also spoke to the media. As Goh Pek Lin, best friend of Rachel (Constance Wu), she plays someone raised in the United States so she keeps her natural New York-tinged American acccent in the movie. 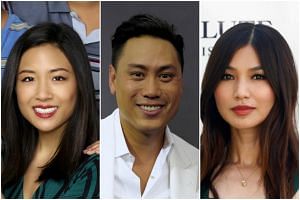 But to her ears, the Singapore accent "sounds like my grandfather's accent" because he was Cantonese. Pek Lin has eccentric taste in clothes so Lum was dressed in child-like bright red dress with rabbits on it. Her craziest outfit in the film is "dog pyjamas", she said. "It's white pyjamas with dogs on it. I wear them for most of the movie."