SINGAPORE - Some of the cast of romantic comedy movie Crazy Rich Asians, which has many of its scenes set in Singapore, are seen trying to speak Singlish in a video.

In an interview with American entertainment magazine and website Variety posted online on Thursday (Aug 16), stars Henry Golding, Michelle Yeoh, Constance Wu and Ken Jeong play a game called "Do you speak Singlish?" and try to guess the meaning of terms such as "lah", "chilli crab", "shiok" and "makan".

Yeoh, a Malaysian, and Singapore-based Golding, who is British-Malaysian, fare well in the challenge, as they explain the terms correctly.

Said Yeoh of the chilli crab dish: "In Singapore, they serve some of the best chilli crab and you have to eat it with bread and dig into the sauce."

Golding said of the term "makan", which means to eat: "You lepak, you chill with your friends, and you usually makan." Lepak means to relax or to hang out in Malay.

Yeoh added: "It's (makan) very important for us Asians - food."

Asian-American Wu, who stars in TV series Fresh Off The Boat, gave a light-hearted take on chilli crab. "I'm gonna guess that's a crab with chilli," she said. "Or it's a crab that's really cold." 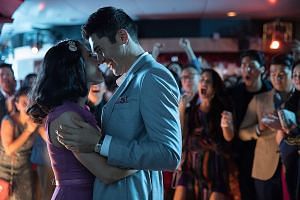 Fellow Asian-American Jeong, a stand-up comedian, hazarded a guess at what "shiok" means. "(It means) delightful - in my apparent knowledge of Singaporean culture."

Shiok means cool, great, delicious or superb, according to the Oxford English Dictionary, which added the term to its collection in 2016.

The movie by Warner Brothers will open in Singapore cinemas next Wednesday (Aug 22).

Golding plays Nick Young, the movie lead who is heir to one of Singapore's wealthiest families, while Yeoh plays his mother, Eleanor Young, and Wu his love interest, Rachel Chu. Jeong plays Goh Wye Mun, a property tycoon, in the movie.