DUBLIN (REUTERS) - Dolores O’Riordan, the lead singer of Irish rock group The Cranberries, died suddenly on Monday (Jan 15) at the age of 46 during a recording trip to London, her publicist said.

The cause of death was unclear.

The band went on to sell over 40 million records to become Ireland’s second-best-selling rock band after U2.

But a naturally reserved singer, O’Riordan often struggled with fame, leaving her native Ireland for several years to avoid the spotlight. During her separation from her husband in 2014, she was arrested for attacking a police officer.

The singer’s publicist said she died during a short recording trip to London, but declined to comment on the cause of death.

“Family members are devastated to hear the breaking news and have requested privacy at this very difficult time,” the publicist, Lindsey Holmes, said in a statement.

O’Riordan is survived by two daughters and a son.

Police in London said a woman in her 40s was pronounced dead early on Monday at a hotel on Park Lane in central London.

A spokesman said police were continuing inquiries into the death, which was being treated as “unexplained”.

The woman had yet to be formally identified, he said. 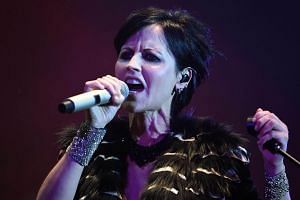 The Cranberries lead singer Dolores O'Riordan: 6 things to know about her

Tributes pour in for The Cranberries lead singer Dolores O'Riordan

The Cranberries' Dolores O'Riordan's distinctive voice and legacy linger on

The Cranberries shot to fame with their 1993 debut album Everybody Else Is Doing It, So Why Can’t We? after the hit song Linger was picked up by MTV. The band’s first three albums sold a combined 28 million copies.

But the strain on O’Riordan, who was so shy that she performed with her back to the audience during some early concerts, was also becoming clear, with the band cutting short a tour in 1996 citing exhaustion and disillusionment.

O’Riordan left the Cranberries in 2003 and recorded two solo albums, before the band reformed in 2009.

O’Riordan pleaded guilty to headbutting and spitting at an Irish police officer in 2014 following an alleged air rage incident.

Last year, the Cranberries cancelled a number of concerts in North America and Europe, saying O’Riordan was suffering from back problems.

British pop band Duran Duran, whose tour manager, Don Burton, was O’Riordan’s husband from 1994 until they separated in 2014 and was father to her children, said in a twitter post that they were “crushed” by the news.

We are crushed to hear the news about the passing of Dolores O’Riordan. Our thoughts go out to her family at this terrible time. https://t.co/6p20QD2Ii5 pic.twitter.com/vXscj0VGHS

So saddened to hear about the sudden death of Dolores O’Riordan. Our sincerest condolences to @The_Cranberries and all of her loved ones.

Irish singer Hozier said he was “shocked and saddened”.

“My first time hearing Dolores O’Riordan’s voice was unforgettable,” he said. “I’d never heard somebody use their instrument in that way.”

My first time hearing Dolores O'Riordan's voice was unforgettable. It threw into question what a voice could sound like in that context of Rock. I'd never heard somebody use their instrument in that way. Shocked and saddened to hear of her passing, thoughts are with her family.