SINGAPORE (NYTimes) - Eugene Ng jabbed a pudgy finger against the side of the glass tank, like a predator singling out his unlucky target.

"That fish's eye is looking a little droopy," said Ng, pointing to a fish with large metallic gold scales swimming happily among its companions.

Minutes later, the fish was knocked out and getting an eyelift, a procedure that has become standard practice in Ng's job as one of the premier cosmetic surgeons for Asian arowana fish here in Singapore. Using a pair of forceps, Ng - known to his clients as Dr Ark, after the pet fish store that he also runs - worked quickly, loosening the tissue behind the fish's eye and pushing the eyeball up into the socket.

"I know some people think it's cruel to the fish," said Ng, lifting his sedated patient with one hand to show off its newly straightened eye. "But really I'm doing it a favour. Because now the fish looks better and its owner will love it even more."

The idea of cosmetic surgery for a fish may sound extreme. But the Asian arowana is not your average pet store fish. Known as the long yu, or "dragon fish" in Chinese, it reigns as one of the world's most expensive aquarium fish, selling for anywhere from a few hundred dollars to tens of thousands of dollars.

"In Singapore, if you have an arowana, that means you have status," said Kenny Lim, a local hobbyist who has invested an estimated US$600,000 over eight years into building up his aquatic menagerie, which includes 13 arowana and more than 100 stingrays. "It's a sign of wealth." 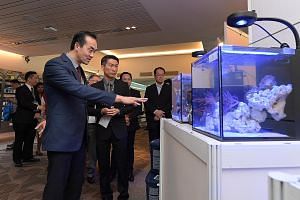 While prices of the fish saw a boom and a bit of a bust earlier this decade, the arowana remains a popular luxury accessory across Asia. Wealthy Chinese businessmen in particular prize the fish - with its large glimmering scales, sage-like whiskers and aggressive personality - for its resemblance to the mythical Chinese dragon.

Adding to the allure are the often-repeated tales of arowana that sacrifice their lives by jumping out of tanks to warn owners about a bad business investment or other potential dangers.

For those reasons, aficionados call the arowana the king of the fish, emperor of the tank, a dragon among mere mortals.

"For Chinese, keeping fish is about bringing good luck and wealth, and the Asian arowana are especially lucky," said Kenny Yap, the executive chairman of Qian Hu Fish, one of the top arowana breeders in Singapore.

"In the West, dragons are evil monsters," added Yap, or Kenny the Fish, as he prefers to be called. "But in Chinese culture, dragons are divine."

Perhaps nowhere is the obsession more apparent than here in this tropical city-state, a hub of the global ornamental fish trade and home to a thriving network of breeders and hobbyists dedicated to the Asian arowana (not to be confused with the silver arowana, its South American cousin).

The fish has become so deeply ingrained as a status symbol that it was even featured in the latest installment of Kevin Kwan's Crazy Rich Asians, a popular series of novels about the lives of Singapore's elite, in the form of a US$250,000 super red arowana named Valentino.

"Singaporeans are crazy about the fish," said Emily Voigt, the author of The Dragon Behind The Glass, a rollicking account of her transcontinental journey into the murky world of the arowana.

At one point, Voigt said, the global craze for the fish reached such a frenzy that even in Singapore, where the crime rate is so low that a stolen delivery parcel makes headlines, there were four arowana heists in one week. During one of the robberies, the thief punched an elderly woman as he ran away with her fish in a sloshing bucket.

In a separate episode, a Singaporean man was sentenced to three years in prison and 12 strokes of the cane for trying to steal arowana from a shop.

The prominence of the Asian arowana is a sharp reversal in fortune for a fish that half a century ago was considered by locals in its natural swamp habitat of Borneo and Indonesia to be a common food fish - and a rather bony and tasteless one at that.

Experts say the turning point came in 1975, when the Convention on International Trade in Endangered Species of Wild Fauna and Flora, signed by 183 countries, banned the fish from international trade. By classifying it as a rare species, some say, the treaty elevated its status as a luxury item.

After the ban, a booming black market for arowana emerged. Smuggled arowana were turning up in countries around Asia and later in the United States, where it is still banned. The overwhelming demand had a devastating effect on the wild population of arowana. So starting in the late 1980s, restrictions were loosened to allow trade of farm-bred arowana whose parents were also born in captivity.

While the wild arowana never recovered, trade in captive-bred arowana flourished, reaching a peak in the 2000s as buyers in mainland China jumped into the game.

"It's like a beauty pageant," said Alex Chang, the head of research and development at Qian Hu Fish, who was caught several years ago attempting to smuggle two suitcases full of endangered fish worth more than $180,000 into Australia. "The fish cannot be fat. It must look strong and have personality. It must swim confidently and be firm, stern and fierce. It cannot be timid."

But around 2012, the price of arowana crashed as breeding farms flooded the market. While prices have somewhat bounced back in recent years, big farms like Qian Hu have begun breeding other species.

Despite the sharp dip in prices, the arowana remains an aspirational luxury good and a point of obsession for many Singaporeans.

As a young boy growing up in Singapore, Nicholas Chia always dreamed about having an arowana. Then, last year, he finally bit the bullet and bought his first one. Since then, he has acquired five more. Now, he keeps his prized fish in six large tanks that take up a third of his living room.

"Sometimes my wife complains that I neglect the children because of the fish," said Chia, a 30-year-old software entrepreneur. "To a certain extent, yes, I guess that's true."