The story: American pickpocket Michael Mason (Richard Madden) is hunted by the CIA when he unknowingly steals and deposits a bag in Paris containing a bomb. CIA agent Sean Briars (Idris Elba) tracks him down and discovers that there is a much bigger terrorist plot in the city.

If anyone needed any more convincing that Idris Elba has what it takes to be the next James Bond, just watch this film - essentially an extended audition video for the role. 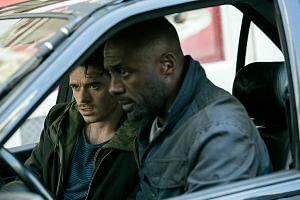 The towering British star goes all out here in delivering a number of slick action sequences, confidently shooting guns and jumping off buildings, all the while looking suave.

A chase scene filmed on top of Parisian rooftops is especially thrilling, reminiscent - dare we say it - of Daniel Craig's parkour stunts in the opening sequences of the 2006 Bond movie Casino Royale.

Given that most of Elba's stunts here are real and not computer- assisted, the casting of the next 007 boils down to a matter of preference rather than any question of his ability: He would do nicely if a rugged Bond in the vein of incumbent Craig is wanted, but The Night Manager's British star Tom Hiddleston would be the better choice for a dapper gentleman Bond a la Pierce Brosnan and Roger Moore.

Going back to Bastille Day, Elba's cool moves and smart suits cannot save it from being one terribly generic action flick, from the conspiracies between the higher- ups in the government to the token female who gets embroiled in the mess (Charlotte Le Bon).

Worse, Elba and Game Of Thrones actor Richard Madden's odd-couple shtick sorely lacks chemistry. Beyond the few bits of witty verbal sparring, the two constantly throw up cheesy, hackneyed action flick lines such as, "We got a job to do".

Then again, Elba's failed bromance means nothing for his chance to be Bond, who has always been more partial to women.