SINGAPORE - Controversial Bollywood epic Padmaavat opened in cinemas across India on Thursday (Jan 25), after months of protests over a supposed love scene in the film between a Hindu queen and a Muslim conqueror.

As curtains opened on the period drama, reviews of the film have taken centre stage, eclipsing the sound and fury over the film.

Reviews of the movie, which is set in medieval India and tells the story of the battle fought over the beautiful Hindu queen Padmavati, has ranged from mixed to positive, with many highlighting the stunning cinematography and strong performances.

The positive reviews include one in Britain's Guardian newspaper, which gave the movie 4 out of 5 stars and hailed it as a "gloriously stirring spectacle".

In contrast, the United Arab Emirate's Gulf News gave it 2.5 out of 5 stars, calling the plot "reductive and predictable".

The controversy surrounding the Sanjay Leela Bhansali-directed period film blew up a year ago when rumours spread that the film would depict a love scene between the Hindu queen and the Muslim conqueror. This led to protests and riots, though the filmmakers have denied the existence of such a scene repeatedly. 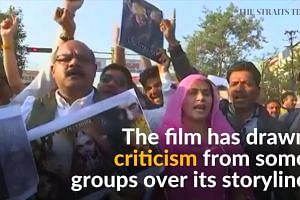 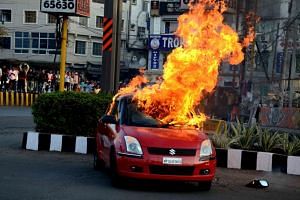 On Thursday, the movie opened amid heavy security in major cities like New Delhi and Mumbai, even as Indian media reported that Hindu radicals in neighbouring states like Uttar Pradesh and Bihar protested by vandalising malls, burning vehicles and ripping up cinema posters.

But riot police and barricades could not stop film-goers in the Indian capital of New Delhi from showing up anyway to watch the film, AFP reported.

Major Indian news organisations like The Times of India gave it 4 out of 5 stars saying that the film won its "trial by fire". It said the fairy tale sheen that Bhansali gave the story " makes all the controversy pointless, and pales in comparison to the spectacle that unfolds".

The Indian Express, as well as noted film critic Anupama Chopra, were less effusive with their praise, giving it 2.5 out of 5 stars.

While the film's cinematography was opulent and spectacular, Chopra said she was not "seduced by the storytelling" and that there was too much "valorisation" of the Hindu Rajput characters in the film.

Still, Singh's depiction of Alauddin Khilji came in for praise, with The Indian Express calling him "electric".