SINGAPORE - One can't say that English singer-songwriter Ed Sheeran is the most groundbreaking of artists.

Take the two songs that he played as the encore on the first of his two sold-out nights at the Singapore Indoor Stadium. Shape Of You bears more than a passing resemblance to TLC's No Scrubs while the rapid delivery on You Need Me, I Don't Need You sounds a lot like Jason Mraz's The Remedy (I Won't Worry).

But what made his live show so endearing - and there were plenty of enthralled faces among the 10,000 crowd - was his understated charm.

Unassuming in a black T-shirt, dark blue jeans and sneakers, the 26-year-old seemed as if he could be one of your best buddies, that guy always carrying around a guitar around with him and eager to get everyone to participate in singalongs.

Looking at him perform with the barest of stage set-ups - comprising of only a small-scale acoustic guitar and looping effects pedal - it would be easy to forget that Sheeran is currently one of the biggest mainstream pop stars on the planet, one with countless charting hit songs and a global tour that fills up arena-like spaces.

The ginger-haired singer came on stage at 8.29pm with Castle On the Hill, a song from latest album ÷, to a deafening roar from the audience.

"We're all gonna lose our voices tonight," he said to the fans, who sang along to hits like The A Team, his debut single from 2011 album +.

Ed Sheeran plays The A Team

His music seems to appeal to a wide demographic. Although a majority looked to be in their late teens to early twenties, there were plenty of preteens as well as middle-aged audience members. 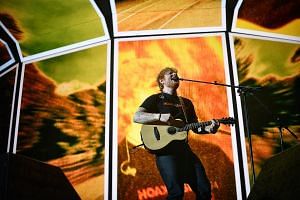 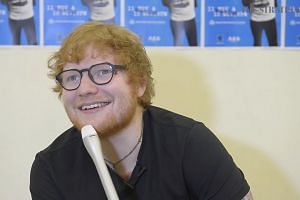 Ed Sheeran all set for Singapore concert after bike accident: 'I feel good'

His dancing was terrible, a point he admitted to early on in the 100-minute long show, but who cares?

No one should be self-conscious in a gig, he reminded the fans, and it's dark so everyone can hardly see each other.

"You can do whatever you want and get away with it," he told them.

He was not about to let fans forget that the Singapore show, his second here after a 2015 concert at the Star Theatre, was his first gig since a bicycle accident last month that left him with a broken wrist, elbow and rib.

He was unable to play the guitar in the last six weeks, which was a torture, he told the fans, the wide grin on his face showing that he was genuinely happy to be back on stage.

He seemed fine and while he was seen to be holding his wrist a couple of times, it did not look like he was in pain. He strummed furiously and banged on his guitar to get the percussive sounds on songs such as Bloodstream from 2014 sophomore album X.

There was plenty of love for newer songs such as heartfelt ballad Perfect and the pseudo-rap in Galway Girl, both off his latest album ÷ released in March.

How Would You Feel (Paean), also from the new album, featured something missing from his last show here - an additional musician, electric piano player PJ Smith.

Sheeran's Saturday (Nov 11) gig, which had a brief opening set by American pop singer Lauv, proved that his fanbase here had grown too - the audience in his 2015 gig was only half as large.

The show on Sunday was also sold out and there is little doubt that if a third show had been added, all the tickets would have been snapped up quickly too.

Maybe it's the sense of familiarity that his music brings, but as his show proves, you don't really have to bring bells and whistles to carry a big show; an everyman appeal works just as well.