Some 12,000 pre-sale tickets for Coldplay's A Head Full Of Dreams concert here on April 1 next year sold out in just one hour after going on sale on Thursday morning (Nov 17) at 10am, according to the concert's organiser Live Nation Lushington.

The pre-sale for Citibank cardholders was intended to run from Thursday to Saturday (Nov 19).

Presale tickets for subscribers to the Live Nation Lushington mailing list will go on sale on Sunday (Nov 20) from 10am to 11.59pm.

Live Nation Lushington says that 12,000 to 14,000 tickets will be available on each of those two days, across all ticket categories.

Another 10,000 tickets might be released after that, pending production and layout issues that Live Nation Lushington will discuss with Coldplay's production team. 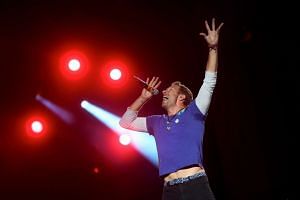 It's no joke, Coldplay to play their 4th Singapore show at National Stadium on April 1

Lushington's managing director Michael Roche told The Straits Times that within 30 minutes of the sale on Thursday, 80 per cent of the allocated tickets had sold out and that at any one time there were 5,000 to 6,000 users trying to make transactions.

In Pictures: Coldplay - A Head Full Of Dreams tour

He called this "unprecedented", adding that "the only other time this happened was when Michael Jackson played in Singapore for the Dangerous Tour in 1993". Jackson's sold-out two-day concert saw 80,000 to 100,000 concertgoers in attendance.

Coldplay's upcoming concert will be their fourth in Singapore.

A few hours after the first batch of pre-sale tickets sold out, scalpers were already selling tickets at 10 times the cost price, with some going up to $3,150 for Category 1 tickets that originally cost $268.

Sites such as mobile e-market platform Carousell and resale ticket website Viagogo were both seen to have listings selling the concert tickets, many with marked-up prices.

One seller on Carousell was selling nine consecutive Category 3 tickets, each originally priced at $128 each, citing inability to attend "due to a work trip scheduled after purchasing the tickets".

The only ticket restriction listed on the Sports Hub Tix event page was "4 tickets for CAT 1 per transaction".

Mr Roche is aware of the reselling of tickets and said his team is going to reach out to all reselling platforms to demand that they take down the listings. They are also prepared to bar people with resale tickets from entering the concert grounds.