SINGAPORE - Take a trip down memory lane as the cast and crew of three classic 1998 Singapore films - The Teenage Textbook Movie, Forever Fever and Money No Enough - reunite for talks alongside free screenings of the works in November.

Tickets for the films, which have all been restored by the Asian Film Archive, will be available for free with registration online from Oct 8 at singaporeclassicsreignited.peatix.com.

These screenings and talks, a celebration of the films' 20th anniversary, will take place Nov 1 to 3 and Nov 9 to 10. They are taking place in the lead-up to the Singapore Media Festival (SMF) from Nov 28 to Dec 9, the annual umbrella event that celebrates television, film and digital media content.

The Teenage Textbook Movie, directed by Philip Lim and based on the novel by Adrian Tan, stars Melody Chen and Lim Hwee Sze as best friends navigating boys and junior college.

Forever Fever, the musical comedy film by Glen Goei, stars Adrian Pang as a supermarket employee who enters a disco contest after getting inspired by the movie Saturday Night Fever (1977).

With ticket sales of over $5.8 million, the film was the highest-grossing local film for years until 2012, when Neo beat the record with the 2012 military-themed Ah Boys To Men ($6.2 million). 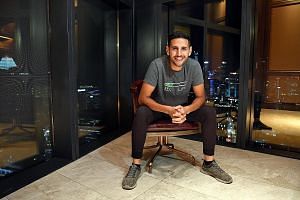 Lunch With Sumiko: Viral vlogger behind Nas Daily is uniting the world, one minute at a time

Nas Daily vlogger on Singapore: If they can solve so many problems in 53 years, then why can't we?

Besides these screenings, another highlight at the SMF this year is the chance to meet and work with Nuseir Yassin, founder of the popular video series Nas Daily.

The 26-year-old vlogger will be speaking about building digital audiences at SMF Ignite, an event which brings together digital content creators.

He will also select three Singapore content creators to mentor, so that they can produce their own one-minute videos, a signature format of Nas Daily.

The Philippines is the SMF's country of focus this year.

That means that stories from it will be highlighted across the various constituent events, including the Singapore International Film Festival, which will screen a programme of Filipino films, as well as at the Asia TV Forum & Market, which will play host to several Filipino media veterans such as Peter Bithos, the chief executive officer of video streaming service Hooq.