TAIPEI - Legendary Taiwanese entertainer Chu Ko-liang, whose variety show videotapes in the 1980s brought him fame in the Hokkien-speaking world, died in hospital on Monday (May 15), said Apple Daily. He was 70.

He died in his sleep at National Taiwan University Hospital, where he had been warded since March, said the report. The causes of death were cancer - which had spread from the colon to the abdominal cavity, lungs and liver - and liver failure, said the hospital.

His family said in a statement that "he was really tired" and "went peacefully".

The comedian had a roller-coaster career, starting in the 1980s, said Apple Daily. With his vulgar jokes and signature "toilet bowl" haircut, he was the king of the Taiwanese cabaret scene and his videotape series Chu Ko-liang Cabaret Show was popular not only in Taiwan, but also with Hokkien-speaking viewers in China and South-east Asia.

But he got involved in gangs and gambling. In 1988, he was shot at a karaoke bar. In 1993, as gambling debts piled up, he abandoned his career and went into hiding.

After a comeback in 1997 failed, he disappeared again for 10 years, from 1999 to 2009. When an Apple Daily photographer caught him eating oden, or food simmered in broth, in Pingtung, southern Taiwan, in February 2009, he had changed his hairdo to avoid recognition. 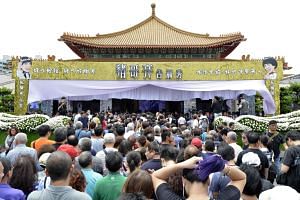 But having been found by the press, he took the opportunity to make a smooth comeback. As he found his second wind, his variety shows including Zhu Ge's Return had high ratings, and his Chinese New Year movies including the 2013 comedy David Loman and the 2014 time-travel drama Twa-Tiu-Tiann were box-office hits.

He had two sons and three daughters from four marriages. His second daughter, singer Jeannie Hsieh, was estranged from him and at her concert in Taipei last year, she accused him of being an unfaithful, abusive husband to her mother.

Father and daughter washed their dirty linen in public, and it was bad for business, said Apple Daily. His last film, Hanky Panky, released in January, was his first Chinese New Year movie to fail to reach NT$100 million (S$4.66 million). It took in only NT$67.5 million.

Chu and Hsieh made peace in March.